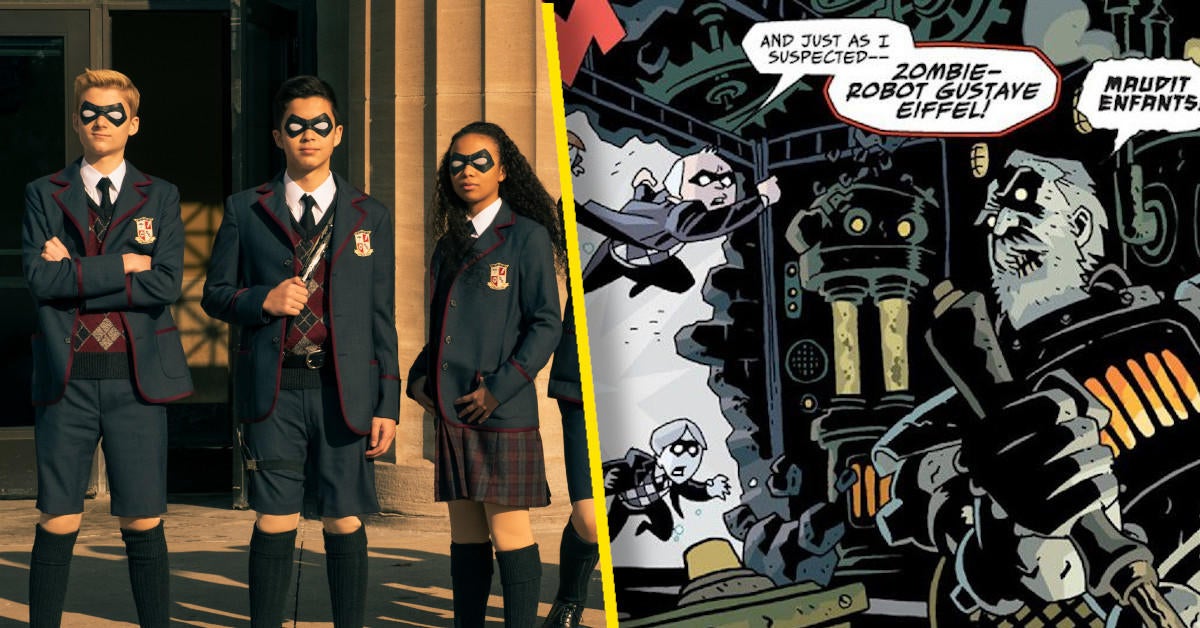 fans of The Umbrella Academy the comics have now had three seasons of the Netflix adaptation, but unfortunately some major elements of the Dark Horse Comics series have not made it to the screen. While much of the source material was done in live-action, some key battles from when The Umbrella Academy were kids have yet to appear on the show, moments like their fight with the Lincoln Memorial. who came to life and a fight inside the Eiffel Tower with Zombie-Robot Gustave Eiffel. Apparently, it’s not for lack of trying, as series creator Steve Blackman revealed in a new interview.

Speaking to Netflix’s Tudum, Blackman was asked if there were any moments in the comics he wanted to bring to life but couldn’t, and unsurprisingly the answer is yes. “Oh my God, so many things,” the series showrunner replied. “There’s the big Eiffel Tower story that we wanted to do from the first pages of kids battling Gustave Eiffel and the tower coming to life as a robot. We budgeted for those things. I sat down with the teams of effects and I said, ‘How much would that cost?’ And then I get sticker shock. There’s some things I wanted to do in Dallas in Season 2 that we just couldn’t afford, but we got to Dealey Plaza. I was really proud that we could actually do that.”

Blackman concluded his interview with the outlet with a cryptic riddle about what a potential season four of the show could look like, teasing a major storyline. He replied, “One of the stories I want to tell next year, if we get caught, is one of the biggest mysteries in graphic novels. I don’t want to say what it is, but fans will probably understand it.”

Casting a guess, there are two potential things he’s referring to, both of which are huge question marks for fans, even those who have read the comics. 1. What gave birth to the Umbrella Academy? 2. Since Sir Reginald Hargreeves is an alien… what is his problem? The series is well suited to answering both of these questions in a potential fourth season, however, with the Hagreeves having remade the world in their image at the end of the third season.

The Netflix series went out of its way to specifically reference the birth of the umbrellas by showing the birth of The Sparrow Academy, and it did so by focusing on specific particles that seemed to float out of nowhere and permeate their mothers. These same particles reappeared in the season finale, when the Umbrellas were trapped in the Hotel Oblivion machine that Hargreeves used to reset the universe. He revealed that the unique energy of their bodies powered the machine, possibly linking the creation of Hotel Oblivion (itself created by….anyone builds the universe) directly to the creation of the Umbrellas. But it’s a story to tell, maybe.