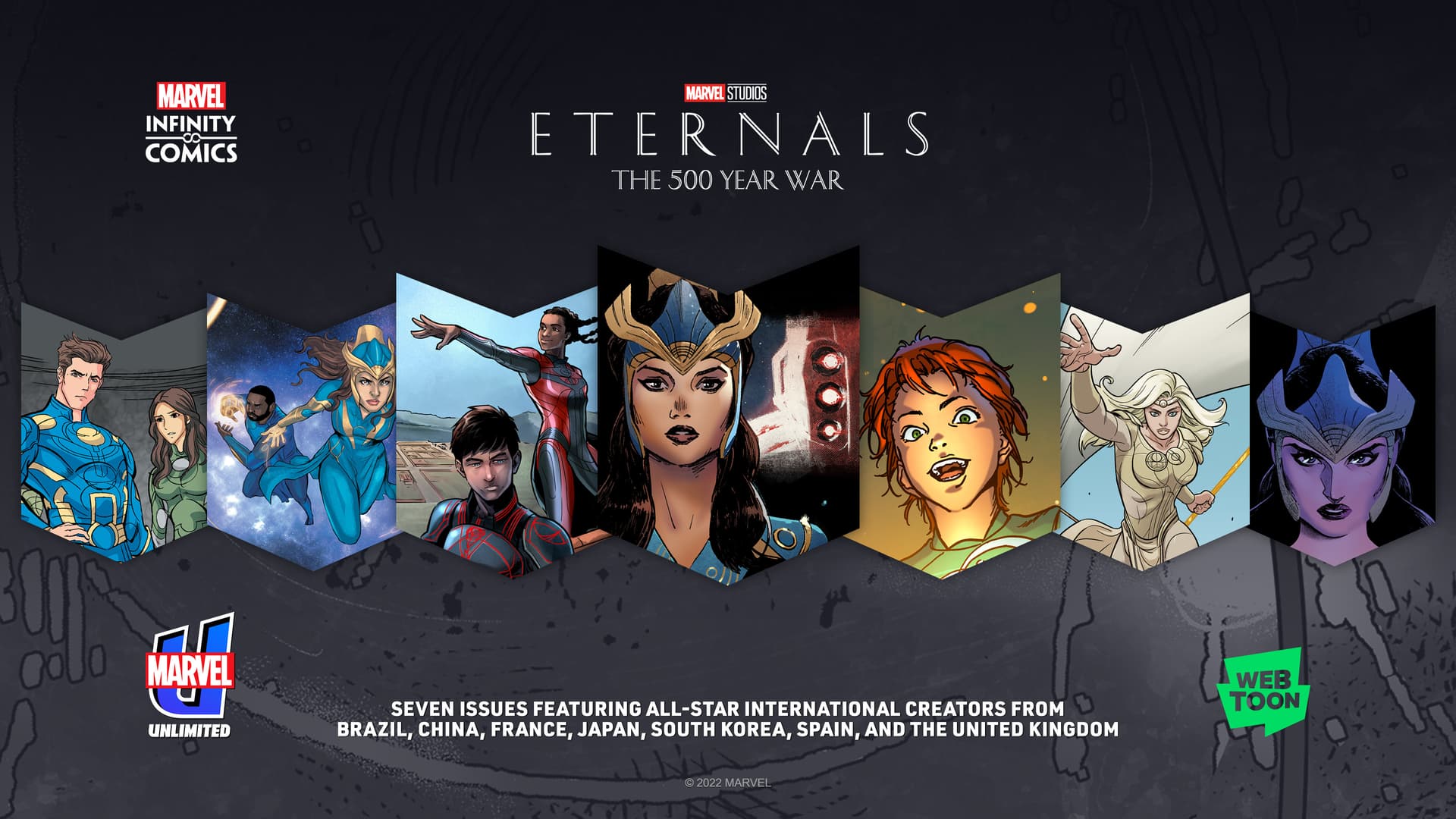 The creative team brings ‘Eternals: The 500 Year War’ to life

Marvel.com had the opportunity to speak with some creative teams about using the WEBTOON format as well as incorporating an Eternals story in their home country.

An international creative team of star writers and artists presents ETERNALS: 500 YEARS’ WAR! Through 7 issues, follow the Eternals in their past encounters against the Deviants. While battling their longtime foes, witness the Eternals interact with different cultures of the human race across time through the cultural artifacts gifted to them.

It’s Sprite’s turn to tell the story of a tumultuous team-up with Kingo in 12th century Korea!

Ajak and Phastos try to negotiate peace during the Spanish Reconquista!

Thena and Gilgamesh go against the grain by foiling an undersea wire in the age of pirates!

Sersi and Ikaris reflect on their complicated history in an interwoven adventure starring their artifact.

The Eternals unite to help Ikaris and Sersi against a deviant invasion!

“It was great helping the editorial team oversee and plan an epic Eternals story that spanned the world and centuries to showcase the characters’ lasting legacies,” shares Abnet. “Without conflicting with or spoiling the film, we set out to create a powerful story that allowed each ‘episode’ to take place at a different time and place, so that each could be delivered by a creative team of this part of the I think as a result, the project has a truly global and authentic feel, and fits perfectly with the spirit and scope of The Eternals.

“I like [playing with the WEBTOON format]”, proclaims geoffo. “As you scroll, you can’t see past what’s on your screen, so you can amaze the reader at any time. We can go from a beautiful, quiet view of the sun, and then have Ikaris fly straight to our face!As Scott McCloud wrote, you can really play with the rhythm, vary the distance between the panels, have a very long panel, make several small panels close together, etc. You have no restrictions in terms of size and from one panel to another, to create tension and surprise with each scroll, the possibilities are endless!

Regarding the characters and the locations themselves, Geoffo says, “When I was working on the episodes, before I saw the movie, I fell in love with the character of Makkari. She’s so cool and badass. I did my best to draw American Sign Language properly. …it was really fun and I was so honoured,” before continuing, “When I’m working on this kind of MCU-related project, my favorite part (at the beyond the drawing) is that I can have exclusive behind-the-scenes access. Seeing the costumes from every angle, the Domo sets, the Deviants turnaround, I could spend days watching it!

“As long as I can remember, I’ve been a huge Marvel fan and loved the story, so thinking about where to put the Eternals Druig and Makkari in the story that I did, and who they would meet in Japanese history was really fun to think about,” reveals Yanagi. “I hope all Eternals return to Japan, in a more peaceful time.”

“Marvel giving me the chance to tell a story set in my country was an absolute treat! But it also involved a lot of pressure and responsibility,” explains Macho. “I mean, you start collecting references, do more and more research, read books, search the web, look at paintings, architecture, and that’s where the idea comes. In In this case, set it to the day in history when the mosque was ‘consecrated’ as a cathedral by the Castilians using real characters and settings. To give you an example, our story takes place in the majestic Mosque/Cathedral of Cordoba. But of course the streets of Cordoba and even the mosque itself didn’t look the way they do now in the 13th century when our story is set.”

“We had to make sure we didn’t make it ‘too modern’ or put something in there that didn’t exist at the time,” Macho continues. “It’s a very subtle thing, but it seemed really important to me that the deviants we show in our story are actually based on real life wildlife living near Cordoba: grizzly bear, genet, Iberian lynx, cinereous vulture and great owl. You even worry about the accuracy of the lighting (Andalusia region of Spain has a very peculiar/special light) and I even sent references of that to the colorist. so wonderfully drawn by Magda, who did such amazing, detailed, hard work, and was such an amazing collaborator, and colored by an amazing color artist like Pete, I feel really proud of the result. want someone, even just one person, to visit Cordoba, or I want to know more about its rich history (because yes, there was an educational intent in the way I decided to tell the story. Guilty as charged), it will do the ho even the happiest on Earth.

“It was fantastic to write a chapter of this,” exclaims Scavone. “Eternals has such a myriad of cool characters that allow you to tell a story almost any time in the story, anywhere in the world. The chapter I had the pleasure of working on, alongside the talented Marcio Fiorito and Felipe Sobreiro, is not defined on the ground, but in the sea, crossing the Atlantic to the global south, on the way to a land that will later be named Brazil. It is fascinating to see ETERNALS : THE 500 YEARS’ WAR take shape through important places and events in history. I am convinced now that this dynamic of weaving a story around important moments of the past was pretty much what the great Jack Kirby had in the lead when he created these amazing heroes, and I’m thrilled to be a part of it.”

“The pressure was absolutely there to write about my house AND the penultimate episode of Dan Abnett’s brilliant overall arc,” says jiang. “Ultimately, I chose to listen to the ‘Chinese Marvel fanboy’ in me, and tried to make it real, fresh, and let my artist Gunji have the fun. (Check out his SWORDMASTER, c is the one to go to when the monsters of ancient China are in order!) Then Dan and editors Darren Shan and Kat Gregorowicz worked their magic and made it so much better. I owe it all to teamwork! “

Follow Marvel Unlimited on Twitter and Facebook to stay tuned for weekly announcements, articles and more, all at @MarvelUnlimited. Follow us today to join the conversation with thousands of other fans and let us know what you read!

8 Things You Didn’t Know About The Recently Canceled Comic