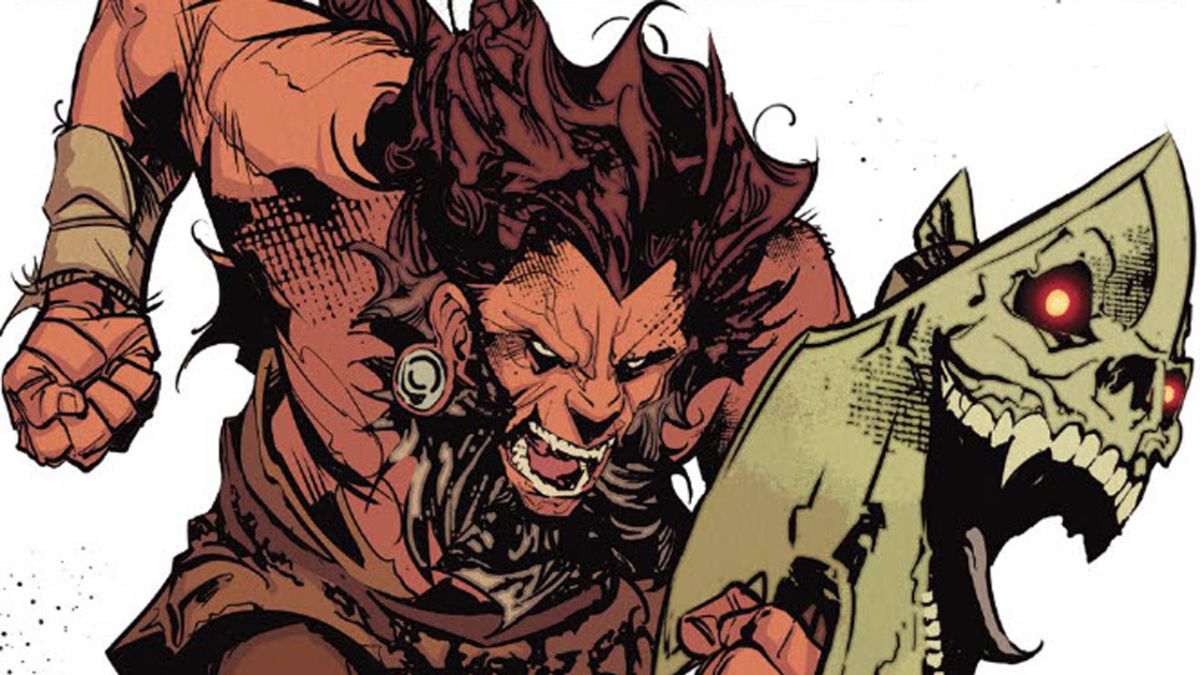 
This summer, Vault Comics’ latest fantasy action saga, Barbaric, is making its way onto comic book shelves. Following the adventures of a violent warrior named Owen and his magical talking ax (named ax), Barbaric is teeming with guts, laughter, creatures, and more than a little magic.

Described as “a 90s blacklight poster come to life” by artist / co-creator Nathan Gooden, Barbaric was created out of a desire by him and writer Michael Moreci for something ” cowardly and riffing ”, released by pure seriousness.

Ahead of the book’s release on June 30, Newsarama sat down with artist Nathan Gooden and writer Michael Moreci to learn more about what inspired Barbaric’s world, what influenced his design, and the type of people we can meet there.

Nrama: Nathan, can you describe the world of Barbaric?

Nathan Gooden: I watch the world of Barbaric as a 90s black light poster comes to life.

Mike and I wanted this world to play fast and free. 2020 has been a tough year for everyone, and I needed something professional, just fun, and free. With that in mind, I did a lot of the design work on the page while I was working. I read Nicholas Eames Kings of Wyld, and Jason Aaron’s run on the Conan comic. From there, Barbaric was born!

Nrama: Michael, before I get into the plot of Barbaric, I wanted to point out that this book has a different tone than your other Vault books, especially the recently concluded horror series. The parcel. Writing Barbaric did it seem different to you and if so, in what way?

Michael Moreci: Well I think it’s similar in some ways to Wasted space, but the book certainly feels looser than anything I’ve done before. And that’s what I wanted.

You don’t often get cowardly, heart-wrenching comics anymore. Nate and I went there and let ourselves be free, and I think not only was the process more fun, but the creativity it enabled really, really shows on the page.

Nrama: Barbaric is absolutely drenched in blood. Can you talk about the key to creating a satisfying and bloody battle scene?

Gooden: With a title like Barbaric, I knew I had to bring a crazy level of violence that would make Conan or He-Man blush. Instead of chopping off someone’s head, I wanted to show how Ax would rip and tear someone’s flesh until their head inevitably falls.

Showing the aftermath of a battle was also key. Owen, Ax and Soren surrounded by heaps of bodies and body parts were some of my favorite panels to draw.

Nrama: Ok, now let’s talk about the plot. We meet Owen the Barbarian when he is under the curse. Who was he before this curse was imposed on him? How is it now that it was?

Moreci: I can’t say too much about who Owen was before the curse, as we’ll be talking about this in future volumes.

What I can say is that, in essence, Owen was a barbarian, wandering the realm, loving life. As he says himself in the first issue. “My life was simple. I drank. I fought. I f ** ked. ‘He was living his best life as a barbarian … and then he was cursed, and he still has to do the right thing. It’s not easy for someone like him! And he’s cranky about it.

He can’t die, he can’t live the way he wants to and he’s stuck with a bloodthirsty ax that serves as his moral guide. It’s terrible for Owen … but hilarious for us.

Nrama: Can you tell us about the source of the curse?

Moreci: They were witches, but the reason for their curse is very specific which will be revealed in a future volume. I know exactly what’s behind the curse and what it’s for, and it’ll be a great story once we blow the lid off. Needless to say, this revelation is really where we’re headed.

Nrama: Despite the dark magic, the guts, and the murder in this book, there’s a ton of laughs. What’s the key to making a good joke in a comic book?

Moreci: This is a great question. I think it’s two things.

The one, my favorite, is the juxtaposition. To pit two very different things against each other. For example, having an ax as a moral compass alone is pretty funny – but then making him get drunk on blood and even feel like After blood is a great source of laughter. A weapon as a tool of morality is something that can save you a lot of time.

Then there’s Owen, a barbarian who never cared about anything other than himself. Again, it’s a dramatic conflict that’s also funny. And the second thing, quite simply, are the extremes. Barbaric’s vanity gets us to some pretty crazy places, and the more we do the gore, guts, and blood, and the characters’ responses to those things, the more humor we can draw.

Nrama: What’s your process of collaborating with colourist Addison Duke like? What does it bring to the page?

Gooden: I started working with Addison on Vampire the masquerade, and we really clicked. We chat every day and he makes me look a lot better than me.

His choices are often completely different from what I had in mind, but so much the better! He doesn’t just color my lines, he adds. He’s willing to take risks, which really pays off in the storytelling.

I think this is just the first in a long line of projects with Addison. (If he wants to have me !?)

Nrama: I’m talking about the cover variant of Barbaric # 1, which is designed to look like the iconic Barry Windsor-Smith Conan the barbarian # 1 blanket. Can you talk about the creation of this blanket? How does Windsor-Smith influence this book or you as an artist?

Gooden: At Vault, Tim Daniels and I are in charge of a vintage line of covers, in which we try to pay homage to the greats who came before us. These covers always have a written story of the artist, covers and his importance to the comic book world. It’s our way of thanking Barry Windsor-Smith for making Barbaric possible.

Grow, Weapon X was one of my favorites, and maybe fans can see a bit of Barry’s design in Barbaric Owen’s anti-hero.

Gooden: The sword and witchcraft that sets me apart, focuses more on the characters and not huge story arcs. Fast-paced action tales that have an immediate impact and consequences on the characters. The challenge is to create a recognizable icon regardless of the setting and the story.

Moreci: Honestly, I don’t really know. All I can say is, really, that’s a question every comic on the stands has to ask itself. “How do you stand out?

For me, it’s all about the voice. It is so important to not only have a unique story to tell, but a unique way to tell it. I think Barbaric is really that, and that’s why people are so excited about it. It’s different; it feels like its own world, and it’s something I wanted to do from day one. If I had my way, Barbaric, this world and its characters will last a very, very long time.