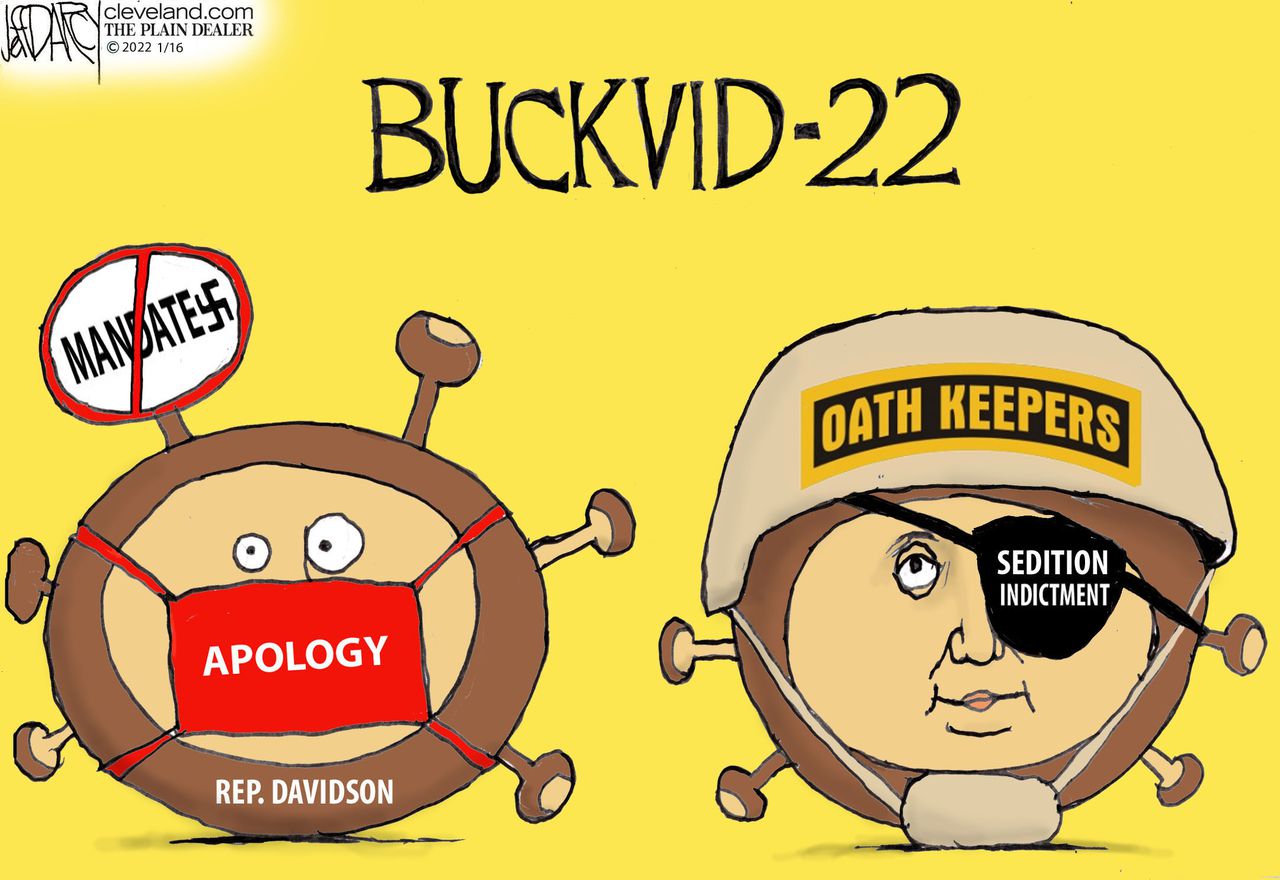 CLEVELAND, Ohio – A new pandemic or pandemic variant has infected Ohio, Buckvid-22. It can be seen in Rep. Warren Davidson joining morons comparing Covid vaccine/mask mandates to Nazis and an Ohio bartender among members of the ‘Oath Keepers’ militia charged with seditious conspiracy in the attack on the January 6 uprising against the US Capitol.

Mayor Bowser had tweeted a reminder to his constituents that they will need proof of vaccinations, photo ID and a mask “before going out.” Rep. Davidson initially responded, “It has already been done.posting a photo of a Nazi health card.

On January 13, after the tweets received widespread condemnation, including from the Anti-Defamation League and Jewish Communities of Ohio, Rep. Davidson tweeted the following apology:

“To my Jewish friends, and everyone else, my sincere apologies.”

“History does not repeat itself, but often rhymes” – Mark Twain

“I had hoped to point this out. Bad things happen when governments dehumanize people. Sometimes there is a next step – systematically isolating them. Unfortunately, any reference to how the Nazis actually acted precludes focusing on anything other than the Holocaust. I appreciate my Jewish friends who have explained their views and I feel awful that I offended anyone. My sincere apologies.”

It’s fair to wonder how sincere Rep. Davidson’s apology really is since as of Sunday morning, Jan. 16, his original tweets were still posted.

Members of the ‘Oath Keepers’ militia seeking to post bail are now charged with ‘seditious conspiracy’ in the Jan. 6 insurrection attack on the US Capitol in an attempt to prevent the certification of the US elections. President Joe Biden and Vice President Kamala Harris. It was the first attack on the American capital since the War of 1812.

Among the charged oath keepers were Ohio bartender Jessica Watkins and militia founder and leader Elmer Stewart Rhodes, 56, of Texas. Communications from Rhodes show him repeatedly speaking of civil war and a new revolution. His longtime, now ex-girlfriend, said she watched the January 6 attack and saw Rhodes’ fingerprints everywhere. Now his fingerprints and Watkins’s are in their place, on the booking sheets.

10 Best Graphic Novels Any Newcomer To Comics Should Read