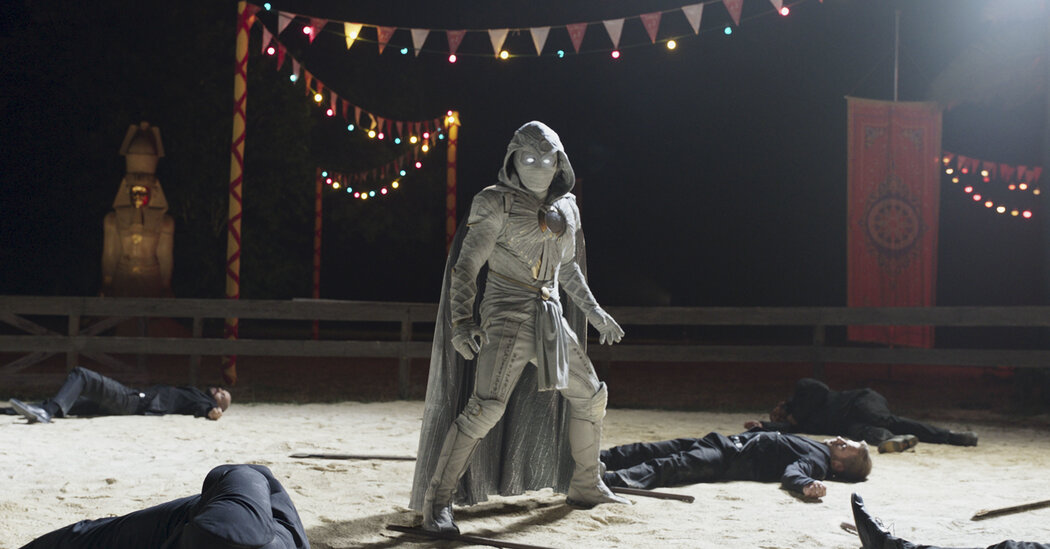 The hero of the new Marvel Comics series, “Moon Knight”, has a superior costume. It’s a cool, bullet-absorbing white costume with a puffy cape and eye holes that glow like milky spotlights. It makes him look like a luminescent Batman. And he refuses to wear it.

His wife, who has a lot of common sense and very little patience, yells at him, “Summon the costume!” Summon the suit! But he’s just hesitating, pouting, or staring blankly at her as the bad guys close in.

There could be a lot behind this avoidance of costumes, including a general move in Marvel TV shows away from the business of superheroes as usual and towards something with a little more, if you’ll excuse the expression, psychological realism.

With “Moon Knight,” premiering Wednesday on Disney+, it also has to do with concept and casting. The show features a relatively minor Marvel hero, created in the 1970s, whose defining character trait is what is now called dissociative identity disorder. In the four (out of six) episodes available for review, he is most often Steven Grant, a mild-mannered clerk at the British Museum’s gift shop, and occasionally Marc Spector, a mortal former mercenary and earthly avatar of a god. Egyptian in search of justice. .

They are, of course, opposite halves of a symbolic whole: brains and brawn, peace and war. But the show generates most of its drama and humor, as well as a number of its visual effects, from their inability to coexist. Visible to each other as reflections, they bicker and trade insults, with Steven abhorring Marc’s violence (even when violent action is necessary) and Marc ruining what he sees as Steven’s weakness.

The popular franchise of superhero movies and TV series continues to grow.

As they try to stop a moralizing villain from resurrecting a rival Egyptian deity, enduring chases, desert treks, and fierce battles, they reluctantly exchange possession of their shared body. The show’s favorite decision is Steven giving in just in time for Marc to save them and their archaeologist wife, Layla El-Faouly. But it takes the most dire of circumstances for the costume to be summoned, transforming the human protagonist into a Moon Knight with magical powers.

And that’s where casting comes in: reflecting Marvel’s ability to attract top-flight talent, Steven and Marc are played by Oscar Isaac, and who wants to wrap Oscar Isaac in CGI mummy bandages, no matter how clever. -they ?

There are plenty of issues in “Moon Knight,” including its treatment of ancient Egyptian culture, its presentation of its Middle Eastern background, and its portrayal of its hero’s mental health issues. But as a drama, it’s built entirely around the Isaac vs. Isaac cage match, which provides medium-to-medium action and feeling and consistently satisfying laughs.

It’s characteristic of Marvel Disney+ shows that the ability of the performers exceeds the inventiveness of the crew – the writers and directors seem to be hired for their skill rather than their distinctive vision. Jeremy Slater (“The Umbrella Academy”), the series’ creator, and its director, Mohamed Diab (the Egyptian feature films “Cairo 678” and “Clash”), only intermittently manage to combine the psychological drama, “Raiders of the Lost Ark” desert adventure and superhero origin story.

A little more flair would help cover up the cracks; as it stands, events and relationships are not easy to analyze, and characters’ actions (especially Steven’s) can be inconsistent. It probably didn’t help that nine writers were credited across all six episodes.

You may also wonder how much emphasis has been placed on navigating the dangers of Orientalism and ableism present in the original material. Appropriations include consultants for Egyptology, Judaism and mental health as well as three general consultants from a company which promises on its website to “flag potential concerns and provide advice on how to avoid or mitigate risk.” (No Islam consultants are listed; the focus on ancient Egypt mitigates the risk of dealing with the country’s predominant contemporary religion.)

We do not know the contribution of the consultants. But on screen, presenting Cairo in a new light (in the interviews, Diab said it was a priority) seems to be about making it look like every other world capital. A scene featuring Gaspard Ulliel, who died in January, uses what appears to be an Arabic form of jousting as a background exoticism; As the characters venture into ancient monuments and archaeological sites, the dangers they face are of a familiar silver-screen variety.

None of this increases the viewer’s enjoyment, but it doesn’t necessarily decrease it either, and you can still concentrate on Isaac’s nervous restlessness, timid stubbornness and questionable accent in his scenes in as Steven. (Convinced of his Britishness, Steven refers to Marc as “the little American who lives in me.”)

And Isaac has strong support: Ethan Hawke plays Harrow, the villain, and F. Murray Abraham is the voice of the god, Khonshu, an arrogant and self-righteous loudmouth who appears to his avatar as a disjointed skeleton topped with a skull of floating ibis. .

The show’s best moments belong to Abraham, who offers helpful advice like “Kill him!” Break his trachea! in hilarious stentorian tones. But the character we love the most is the very competent Layla, who becomes the star of the action while Steven and Marc shoot each other; May Calamawy, who plays the rebellious sister in “Ramy”, gives Layla an irritated and attractive carelessness.

The show’s creators are not unaware of the “Raiders” simile – Steven is watching a movie called “Tomb Buster” whose title is rendered in the same slanted style. And while it’s unfair to wish every desert or jungle adventure could be directed by Steven Spielberg (or Robert Zemeckis or JJ Abrams), “Moon Knight” won’t stop you from doing so.

Better Nate Than Ever review: A teen’s life in cartoon motion