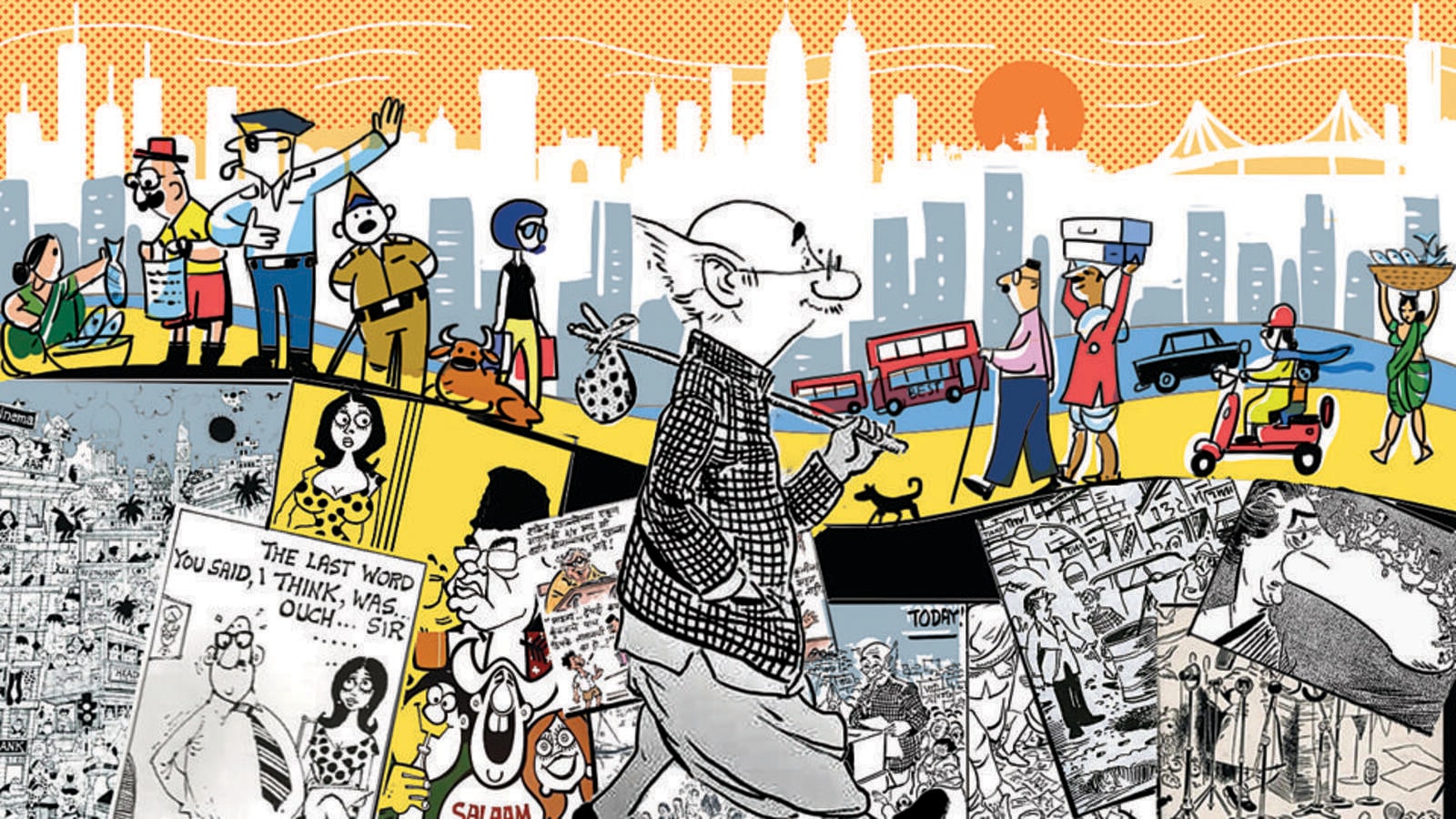 The voluptuous fertility of Mario Miranda, bristling with crowded trains, restaurants, wedding pandals and street corners, featuring the wrecks and jetsams of familiar characters like the buxom Miss Nimbu Pani and Miss Fonseca and the strange, sneaky, stray from the streets, each an essential part of the puzzle that made up the throbbing city, especially its southernmost tip; Laxman’s intimidated but stoic common man (perhaps Matunga’s Mumbai-born man?), his ubiquitous dhoti and checkered coat a hymn to the underdog, an often perplexed silent witness to the antics of the great and of the powerful and of the march of history; Bal Thackeray’s political rapier, capturing the Marathi Manoos and his worldview from his Shivaji Parkperch vantage point in masterful David Low-inspired calligraphy; the cerebral simplicity of Vasant Sarvate’s features, echoing those of his mentor Saul Steinberg, but with a distinct est-Vile Parle flavor, due to the canon of intellectual brilliance of PL Deshpande and Vijay Tendulkar whose books he regularly illustrated; The warm nostalgia of former Mumbaiker Paul Fernandes – the water colors of SoBo standards such as Iranian restaurants, art cafes, markets and city landmarks that never fail to bring a smile of recognition…

Could there be a city in India that has been more richly recorded in vivid brushstrokes, intricately detailed chiaroscuro, or fantastical ink-line exaggerations other than Mumbai through the eyes of its sketchers?

Mumbai’s date with cartoons is undeniable. From the moment the twin genius of Laxman and Mario emanating from the city’s preeminent media house captured the public imagination and Thackeray’s dictates presented in the form of his cartoons to Marmik could bring the city to a standstill and his nephew and MNS leader Raj Thackeray continued the tradition, there was no doubt that Mumbai had a symbiotic relationship with the art of comics.

“Laxman, Bal Thackeray, Mario and others have nurtured the cartoon so well that it has become a part of Mumbai culture. Moreover, being the commercial capital and the home of the country’s entertainment industry, the city has provided a good number of patrons of this art form. Says Manjul, currently one of the country’s top cartoonists, when I ask him about the city’s unique connection to cartoons. His colleague, the equally famous Satish Acharya, agrees: “Of course cartoonists like Laxman, Mario and Balasaheb have inspired generations of cartoonists. He says, “But also, Mumbai being a mecca for media and advertising, offered plenty of options and opportunities for cartoon-loving artists.”

“Cartoonists do best in cities, that’s for sure. The multitude of stimulating situations a city brings is the real food for a cartoonist,” says DR Hemant Morparia, who refers to his artistic pursuit as “his mistress”. and to radiology – his day job – as his “wife”.

All three in this Holy Trinity agree that the city has been instrumental in their development.“

“In my case, I could think of becoming a cartoonist as a profession in the late 90s just because of Mumbai, which gave me the right to dream,” says Acharya, who spent 17 years in Mumbai before to move. a Mumbaiker for life,” he adds.

“I love the city. Its cosmopolitan nature has enhanced my understanding of life,” says Manjul, who came here from Delhi for a stint with a local daily and has never looked back.

“I guess I’m a Bombay cartoonist in the best sense of the word. It’s Catholic in spirit, broad-minded, diverse in taste, accepting and cosmopolitan in sight…” says Morparia.

So what is it about Mumbai that lends itself so well to anime? Could it be the richness of its paradoxes, the extent of its absurdities, the disorderly richness of its quirks and everyday characteristics that have given rise to such a teeming aggregate of interpretations by such a profusion of talents? Should a cartoonist travel far to draw inspiration from a city that seems to lend itself so richly to satire, parody, caricature and humour? From its crowded population at its gills to its abundance of diverse communities to its cornucopia of eccentric characters, its growing inequalities, its relentless social carousel and its politics of careening, it offers those with a penchant for the art of ridicule an embarrassment of wealth.

But, given the ubiquity and reach of computing, it is no longer necessary to reside according to Acharya and Manjul. “Today, physical borders don’t matter. You get the same real-time news in Mumbai as well as in my current location in Kundapura, a small town on the coast of Karnataka. says Acharya. “Now you can see, read and connect with anyone, anywhere. Moreover, comics are a matter of imagination. You don’t have to go to space to draw on astronauts,” says Manjul.

But, as the city burgeons and blossoms, expands and evolves, are cartoons themselves becoming an endangered species? “Cartoons these days that have the most exposure and viewership are the ones that are mostly one-sided,” says Morparia. “A sign surely of the polarization of the general public.”

Clyde Crasto, spokesman for the NCP which carries on the tradition started by the Thackerays of the politician as a cartoonist, says that a few years ago he began to sense there was a lot of bitterness in politics and can maybe his caricatures would lessen the bitterness. Recently, the politician was delighted to be invited back to the same classroom at St Xavier’s College where he once sat as a student, to present a course on comics. “Being a spokesperson for a political party that combines these two aspects of my life has become easy for me,” he says.

Manjul, known for his outspokenness and fearlessness, laments the current lack of subtlety and nuance in public discourse, but says it’s a natural consequence of changing times. “How many of the new generation know the works of great literature?” he asks. Last year, he saw one of his longstanding contractual engagements with a media group abruptly terminated after receiving a notice from Twitter that Indian authorities had ordered him to take action against his page. Acharya, whose cartoon on the Charlie Hebdo massacre has been hailed internationally as one of the tragedy’s most notable indictments, has also faced editorial censorship.

The experience of these drafts is a harbinger of the polarized and hyper-intolerant times in which we live. Gone are the days when a Miss Nimbu Pani or the good-natured antics of the common man could put a smile on the lips.

Perhaps humor and tolerance have escaped from our lives as from the city itself.

“Today’s cartoons, like all of us, are more angry than funny,” says Morparia.

Acharya’s response to how he experienced World Comic Book Day, which fell on May 5, is representative of this “It was just another day” trend, he says. “Past drawing cartoons, answering questions from cartoon enthusiasts – and dealing with trolls…”