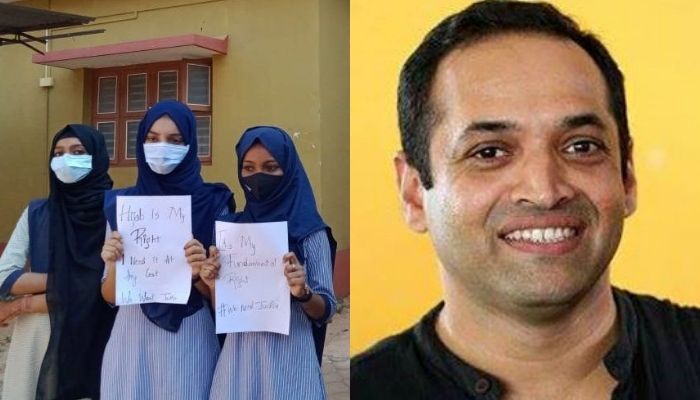 On Tuesday January 25, political satirist Satish Acharya was criticized by Islamists for his “anti-Muslim” caricature on social networks. Her work was published against the backdrop of an ongoing controversy at a college in Udupi where 6 Muslim girls were banned from attending classes for wearing hijabs over their uniforms.

Satish Acharya’s cartoon represented a “Muslim” dressed in a hijab (scarf) and being caught in the middle of two groups. While one group told the girl she couldn’t go to college with a hijab, the other group told her “no college without hijab.’

Islamists slam satirist for suggesting Hijab can be ‘forced’

Although Acharya tried to “normalize” the wearing of religious clothing on the school uniform, his insinuation that the hijab was imposed on girls angered Islamists on social media. They criticized him for deviating from the common Islamist narrative that the headscarf is a matter of choice for women.

In a tweet, popular “news grazer” Zoya Rasul said: “Defenceless, voiceless Muslim women coerced by brutal and aggressive Muslim men have been the most popular undercurrent of anti-Muslim sentiment. This cartoon exhibits the same bias, artfully downplaying the brave and graceful fight these girls have been fighting for weeks now.

In another tweet, a Nihad said, “Hope you heard the girls talking. They are not required to wear the hijab. Maybe you can make a more accurate cartoon next time.

“This cartoon is misleading. Nobody is forced to wear the hijab. But hijab girls are forced to miss school. Big difference,” writes an Islamist.

Another Islamist said, “Shame on you, Satish. Wearing the hijab is their choice. No one forced them to wear this. Stop this biased stuff.

Another Islamist criticized Satish Acharya for his “disgusting” cartoon. “The so-called modern minds, who cannot accept that Muslim women exercise their right and voluntarily practice their religion. But always ready to impose their own false narratives. Too bad for your state of mind, which does not allow you to accept Muslim women who are attached to their beliefs,” he added.

A certain Mohsin Khan repeated the same Islamist argument that the hijab, like the bikini, is a matter of choice. This however is in complete disregard of the fact that the college has a compulsory uniform for all students and does not encourage religious symbolism or bathing suits.

“If a woman wears a bikini, that’s her choice. And if she’s wearing a burqa or a hijab, then it’s forced. It just shows your biases. Not much,” he said.

Udupi hijab row: The background of the case

The controversy started on January 1 this year when 6 Muslim female students from a pre-university college (PUC) in Udupi attempted to enter their classes wearing a hijab. The school principal, identified as a certain Rudra Gowda, banned the girls from attending classes in their Islamic attire.

He pointed out that this negates the purpose of a uniform. According to the Minister of Education of Karnataka, BC Nagesh, uniforms existed in the said PUC government since 1985. He informed that there had never been any problem till date.

“The college uniform has been there since 1985. Until now, there were no problems. Uniformity creates a common spirit. Kesari shawls are also not allowed in middle school. The same six girls had been OK [with the uniform] until 1.5 years ago. They were suddenly provoked,” he remarked.

The girls then started a demonstration in front of their classrooms for 3 days to allow them to enter with their headgear. They have now been asked to attend online classes until the issue is resolved.

Meanwhile, Hindu Jagarana Vedike (HJV) had warned that Hindus would wear saffron shawls in class if the Hijab was allowed for Muslim students.

Miles Morales becomes Wolverine, the deadliest weapon in the world

Digital Comics Including Webtoon and Smartoon See Strong Growth in 2021