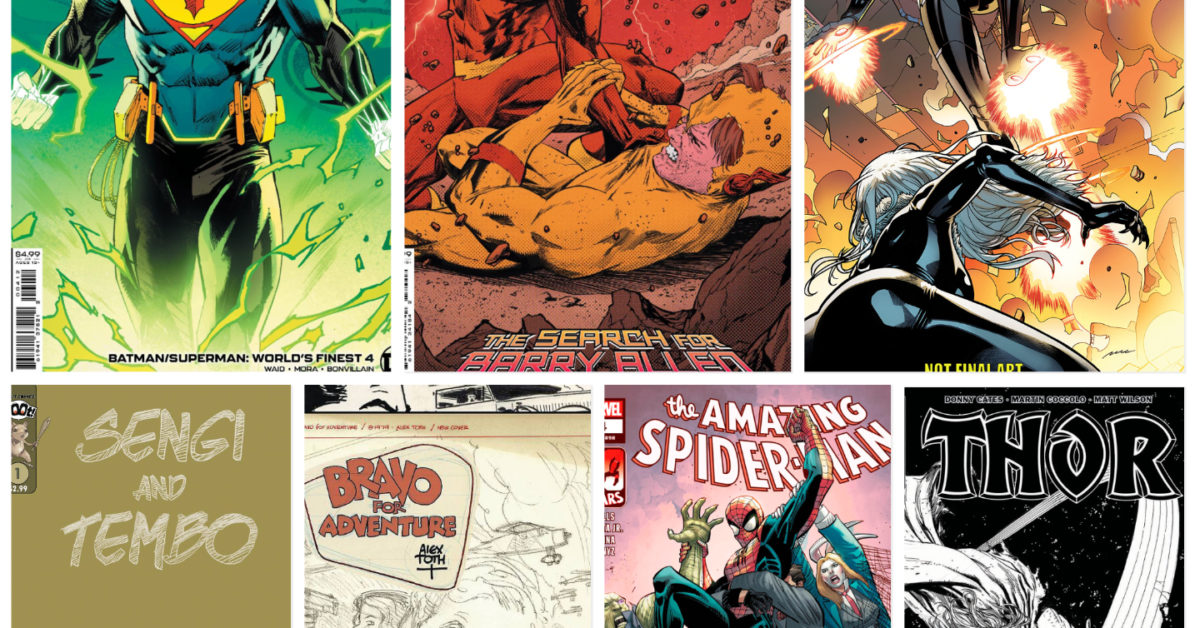 Print Watch: iron cat #1 and amazing spider man #4 gets second prints from Marvel Comics, Batman/Superman: the best in the world #4 and the flash #783 from DC Comics, Sengi & Tembo #1 in Scout Comics and Alex Toth’s Artist Edition of the IDW.

PrintWatch: “Mark Waid and Dan Mora’s Batman/Superman: World’s Finest #4, featuring the Dark Knight and Man of Steel fusion that immediately captivated fans upon its reveal, gets a second printing on sale August 2 , with a final order deadline of July 10! Batman/Superman: World’s Finest #4 Second Printing features a new version of the out-of-print variant cover by Dan Mora and Tamra Bonvillain…”

Print Watch: INCREDIBLE SPIDER-MAN #4
MARVEL COMICS
(F) Zeb Wells (A/CA) John Romita
• After what just happened with Tombstone, Spider-Man still has to fight a well-armed gang to save dozens of innocent New Yorkers.
• With his spider powers, he can probably take ten or fifteen, can’t he? What if there were thirty?
• ASM #900 is almost here! T+ Listed Selling Price: $3.99

PrintWatch: “The Flash #783 by Jeremy Adams and Amancay Nahuelpan is rushing to a second printing on sale August 2, with a final order deadline of July 10! The issue, a tie-in to DC’s hit Dark Crisis event, is the start of “The Search for Barry Allen” – and the second printing features new cover art by Amancay Nahuelpan and Jeromy Cox, featuring art inside the number.”

Print Watch: IRON CAT #1 (OF 5)
MARVEL COMICS
(F) Jed MacKay (A/CA) Pere Perez
Iron Cat’s armor made its first appearance in BLACK CAT #11 but Black Cat and Iron Man thought it was the last they would see of it. If Felicia is surprised to see the armor again, you can imagine how furious Tony is. There’s someone new in the Iron Cat armor, and they’ve got a plan that will put them in the crosshairs of every hero in the Marvel Universe. The secrets and mistakes of Iron Man and Black Cat will come back to haunt them and it will get GROSS! Don’t miss this fantastic new mini-series! T+ Listed Selling Price: $4.99

Print Watch: SENGI AND TEMBO #1 2ND PTG
COMIC SCOUT – SCOOT
JULY221904
(W) Guiseppe Falco (A) Guiseppe Falco
Scoot! Imprint: The perfect introduction to the Sengi and Tembo paperback returns to print with a newly remastered cover! In the African savanna, an animal’s survival may depend on its family and friends. Sengi, a little mouse finds himself alone, and Tembo, an old elephant, has chosen to leave his herd behind. When these two meet, it seems unlikely that they could become friends. However, in a fight for survival, they will form a powerful bond and form a new family. This heartwarming tale was beautifully written and breathtakingly illustrated by the very talented Giuseppe Falco. Enjoy the first issue of this NON-STOP! title followed by the whole story collected soon after in a single volume.
In Stores: Sep 21, 2022 MSRP: $2.99

Print Watch: ALEX TOTH BRAVO FOR ADVENTURE ARTIST ED HC 2ND PTG
SDI PUBLICATION
JULY221594
(F) Alex Toth (A/CA) Alex Toth
Discover the art of one of the most important and influential artists in comics and animation of all time! Of all the comic book stories Alex Toth ever drew, the only one he kept complete original art for was Bravo For Adventure. This Artist’s Edition is a virtual “how-to” course in drawing comics the Toth way. We see how he would draw out every detail of a scene, only to black them out to focus the reader’s eye on what really mattered. Also included are variant versions of the Bravo saga featuring Noah Chance and the experimental aircraft called Condor, plus dozens of never-before-seen pencil sketches, preliminary drawings, and story fragments.

The Spider-Verse explodes with new heroes, new paths and more in “Edge of Spider-Verse” #1