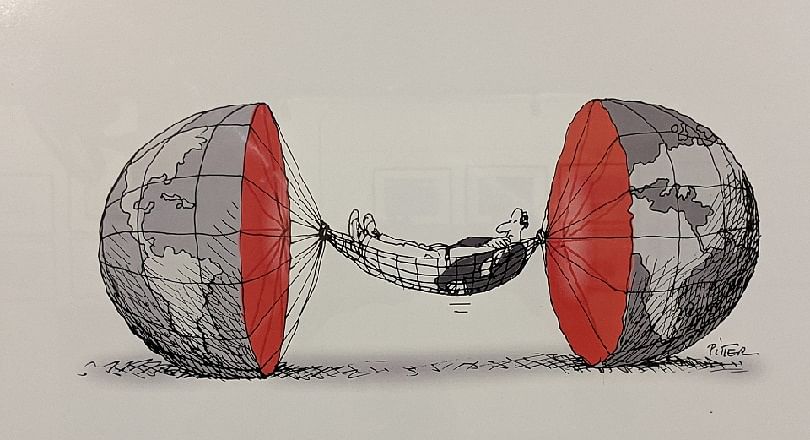 Launched in 2014, PhotoSparks is a weekly column of Your story, with photographs that celebrate the spirit of creativity and innovation. In the previous 570 posts, we featured a arts festival, cartoon gallery. world music festival, telecom fair, millet fair, exhibition on climate change, wildlife conference, boot festival, diwali rangoli, and jazz festival.

One of the cultural treasures of Bangalore is the Indian cartoon gallery (ICG), tucked away down a lane from MG Road at Trinity Circle. See our previous photographic essays on gallery exhibitions from 2015 here.

VG Narendra, gallery owner and curator, is also Managing Trustee of the Indian Institute of Cartoonists (IIC). A draftsman himself, he was trained by Shankar Pillai, founder of Shankar’s Weekly and is often considered the father of political cartooning in India.

The gallery recently hosted an exhibition of exceptional caricatures by the Austrian cartoonist, Klaus Pitter. Title witty world, it featured over 90 of his works collected over the years.

“Klaus has been contributing cartoons to our annual Maya Kamath Cartoon Contest for many years,” says VG Narendra, in a conversation with Your story. Klaus participated in the category “Foreign cartoonists”.

Many of them don’t even have subtitles and are still easy to understand for international audiences. They carry messages on the preservation of the environment, the stresses of modern life and the harsh realities of migration.

Born in 1947, Klaus Pitter studied at the Vienna University of Applied Arts and holds a master’s degree in graphic design. His caricatures have been published in numerous magazines and newspapers, as well as in comic book form.

Klaus was also responsible for the graphic design of the children’s magazine Wunderworld. His works have been exhibited all over the world, in Austria, Germany, Italy, Switzerland, Argentina, Korea, Iran, Japan and India.

Klaus is a member of the Association of Fine Artists in Styria, Austria. He held a number of comic book workshops internationally too. It has won awards and prizes in international cartoon competitions in Brazil, Argentina, Croatia, Hungary, Germany, Serbia, Turkey, Romania and Belgium.

“His cartoons were well received in Bengaluru and the audience really appreciated his creative works,” describes Narendra.

“Cartoons help us, especially in these difficult pandemic times, by making us smile. Cartoons also make us laugh at our circumstances and actions – and laugh at ourselves too,” Narendra signs.

Now what have you done today to take a break from your busy schedule and find new avenues for your creative heart?

See also YourStory pocketbook “Proverbs and quotes for entrepreneurs: a world of inspiration for startups”, accessible as apps for Apple and Android devices.