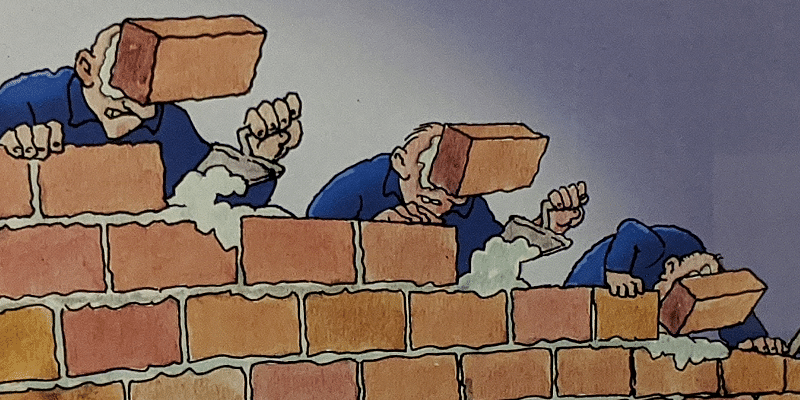 Launched in 2014, PhotoSparks is a weekly column of Your story, with photographs that celebrate the spirit of creativity and innovation. In the previous 580 posts, we featured a arts festival, cartoon gallery. world music festival, telecom fair, millet fair, exhibition on climate change, wildlife conference, boot festival, diwali rangoli, and jazz festival.

The Indian cartoon gallery recently hosted an exhibition of outstanding works by Austrian cartoonist Klaus Pitter. Title witty world, it featured over 90 of his works collected over the years.

Born in 1947, Klaus Pitter studied at the University of Applied Arts in Vienna and holds a master’s degree in graphic design. His cartoons have been published in many magazines, newspapers and comics.

See our previous photo essays on Indian Cartoon Gallery exhibitions from 2015 here. VG Narendra, gallery owner and curator, is also managing director of the Indian Institute of Cartoonists (see part I of our photo report here, and curatorial reflections on the art of caricature).

Your story [YS]: Tell us about your first influences in the world of art and comics.

Klaus Pitter [KP]: I was born in 1947 in a small village in Upper Austria. My father was a teacher, my mother took care of household chores – and I liked to draw from an early age. I “helped” my mother to cook and I illustrated her cookbooks – so this was perhaps a first motivation.

When I was young, I discovered that it was better create something new by myself than getting bored like some of my classmates. I kept this habit until today, and my life as a designer is still exciting.

At the age of 15, my interest in the art of comics increased even further. My dad, although a teacher, was a Donald Duck fan, so I walked through the visual world of Walt Disney.

I then received a small book, a Who is who designers and was immediately enthusiastic. At that time, we were witnessing classical music concerts with my class in the main town. As classical music bored me terribly at the time, I thought of little stories that I could draw – that’s how it all started.

I sent my drawings to local newspapers and magazines. When I was 17, my first drawings were printed. It was very motivating, but I never thought I could make a living from cartoons.

At school, I was advised to study architecture because my visual imagination surpassed all other talents. But I quickly realized that it was not the right thing for me and I turned to graphic arts.

[YS]: How did you come to comics and illustration as a profession?

[KP]: When I took art classes, I was already publishing my cartoons in an intellectual magazine in Vienna, called “Neues Forvm”. Later, I was asked to do the artistic production for a youth magazine. That’s when I learned what it means to be “stressed”.

My exhibition last year at the European Cartoon Center in Kruishoutem, Belgium and now at the Indian Cartoon Gallery in Bangalore are pleasant consequences of my commitment to social media.

[YS]: What is so special about the cartoon for you? If it wasn’t cartooning, what would you be doing?

[KP]: By drawing cartoons, you can express your ideas and thoughts in a way that many people can understand – fortunately all over the world. So it’s a way of learning that we’re all connected.

One of my tasks seems to be to make people think about what they are doing on and with this planet. Another task is to make my messages understandable, which sometimes means reducing, abandoning unnecessary elements of my drawing.

Cartoons are also capable of expressing things that are difficult to explain in words. And humor – the most important ingredient – ​​allows us to approach the rules of life and the world we live in, in a relaxed or laughing way, and can sometimes help to open our eyes.

If I wasn’t making cartoons, I might be making films – it’s the link between the idea and the visual realization that keeps me going.

[YS]: What do you think is the role of humor in these difficult times of a pandemic?

[KP]: I think the role of humor, not just in times of a pandemic, is to remove tension when different viewpoints clash. There’s a spark of humor in every situation, and that might help keep discussions about things like mandatory vaccinations from getting too stubborn.

[YS]: What does comics mean to you?

[KP]: Creating cartoons by combining pictures, words and thought into something new and humorous is a very rewarding occupation. I don’t think so much of my duty to society or my responsibility for the education of humanity.

I think the most important thing is to keep a critical eye on my work and try to deliver high quality, or whatever it is. For me, it’s a good sign if my drawings allow different interpretations.

[YS]: How would you define success for yourself as a designer?

[KP]: Success means when I consider a drawing of mine to be satisfying to people and when I get that confirmed response from other people as well – it means it’s not just my subjective imagination.

Of course, I also consider it a success when I’m invited to exhibit my works – like at the Indian Cartoon Gallery or the European Cartoon Gallery in Belgium, or somewhere else. And it’s encouraging to be mentioned or rewarded in international cartoon competitions.

[YS]: How was the Bangalore exhibition received?

[KP]: I think my exhibition was very well received. There was quite a response in the press, more than I could normally expect in Austria!

[YS]: What are your current activities during the pandemic crisis?

[KP]: One of the impacts of the pandemic crisis was that there were fewer orders – so revenue was meager. On the other hand, there was more time to stay at home and in the office.

So I created many works that are now waiting for editors and publishers!

[YS]: What advice would you give to budding artists and designers in these difficult times?

[KP]: I think it’s important to find your path and follow it with perseverance.

Some of my cartoons that had some success afterwards almost ended up in the trash! It’s important to pick up the threads and stay confident in your work.

If you work as a freelance artist, your income can fluctuate greatly. It is preferable to work in various graphic sectors so as not to be dependent on only one.

Now what have you done today to take a break from your busy schedule and find new avenues for your creative heart?

See also YourStory pocketbook “Proverbs and quotes for entrepreneurs: a world of inspiration for startups”, accessible as apps for Apple and Android devices.