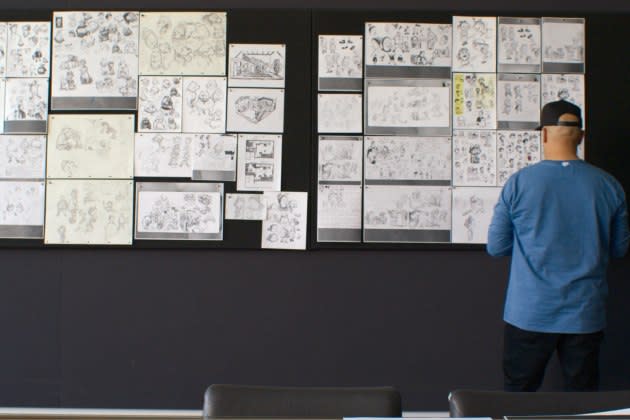 Since launching its Disney Plus streaming service, Disney has drawn back the curtain to reveal how the magic really happens on studio grounds. Providing fans with unprecedented access to some of the most intimate moments of the creative process, the “Gallery” series revealed the efforts developed by Marvel. to keep the comic book effects handy on “WandaVision”. And we’ll never forget watching Sterling K. Brown discover, in front of the camera, in “Into the Unknown: Making Frozen II”, that his song “Frozen II” had been cut (a truly anxious look at the mound of work that goes into the development and execution of an animated feature film).

Next step on the Disney file, a glimpse of the interior Pixar. Variety launches the first trailer for “A story of sparks“, a feature-length documentary that takes viewers into the SparkShorts program – an in-house initiative created to showcase the exciting talent among Pixar’s ranks and tell new stories. The directors have six months and a team of Pixar employees to bring their vision to life (COVID restrictions granted in 2020 extended production of the latest shorts a little longer than usual.) The program has only been around for a few years, but has already produced several popular animations such as “Purl” and “Kitbull.”

The film follows new SparkShorts entries Aphton Corbin and Louis Gonzales as they take a break from their regular Pixar work to focus on creating something entirely their own.

Corbin, whose short is titled “Twenty Something,” was a CalArts student who caught Pixar’s attention after posting several comics to the web about her childhood in a predominantly white suburb. “I just told these stories about what it was like to be one of the very few black people in this environment and posted them online,” Corbin revealed to Variety. “A lot of people really bonded with them in ways that I wasn’t necessarily looking for. I wasn’t looking for a pat on the back. It was just this cathartic thing that I was doing. And I got a lot of responses on this, including Pixar. But it was a way for me to maybe share a universal truth that many people have experienced and that I have shared myself. And so I was recruited for the internship in 2016. And after that I got hired and worked on ‘Toy Story 4’.

Gonzales worked on the classic “Iron Giant” and several other Warner Bros. animated films, before moving on to Pixar. Encouraged by producer John Walker, who was working on Brad Bird’s upcoming feature film, “The Incredibles,” Gonzalez recalls being encouraged to send in his book because he didn’t have an email at the time. “Twenty years later, here I am, laughs the director.

The feature itself will follow Corbin and Gonzalez from the initiation of SparkShorts to the premiere (“Nona” and “Twenty Something” from SparkShorts are both available to watch on Disney Plus right now). After working at Pixar for several years, what was the biggest surprise they learned from the director’s chair? “The level of freedom that we have,” Corbin said. “Before that, I was a screenwriter. It was a surprise that I didn’t necessarily have to present to anyone, that I didn’t have a lot of managerial overhead. It was just like, ‘Go on.’ And it was all blue sky, anything goes. That alone was very terrifying and trying to figure it out, after spending years doing what other people wanted me to do for their movies, it was all up to me, it was a shock.

“When I first started I had this overwhelming anxiety about where I was in my career and what my expectations are,” Gonzalez revealed. “And it was this weird thing, where I kind of felt like walling everyone up and feeling like I had to put it on my shoulders and be the hero carrying it to the end.” And very quickly it felt unbearable. I felt like if I didn’t let people in, how am I going to lead a team? If I don’t invite, if I don’t invite people around the short film, how am I going to make it work? Because I can’t do it myself. And I think the most important thing was how much I had to let go and trust my team. Not that I wouldn’t trust them otherwise, but when it’s yours and it’s your first and you put all that pressure on yourself, of course you want to smash it all the way through the end zone. by yourself and be the hero. “

Directed by Jason Sterman and Leanne Dare, “A Spark Story” premieres September 24 on Disney Plus. Watch the full trailer below:

The best of variety