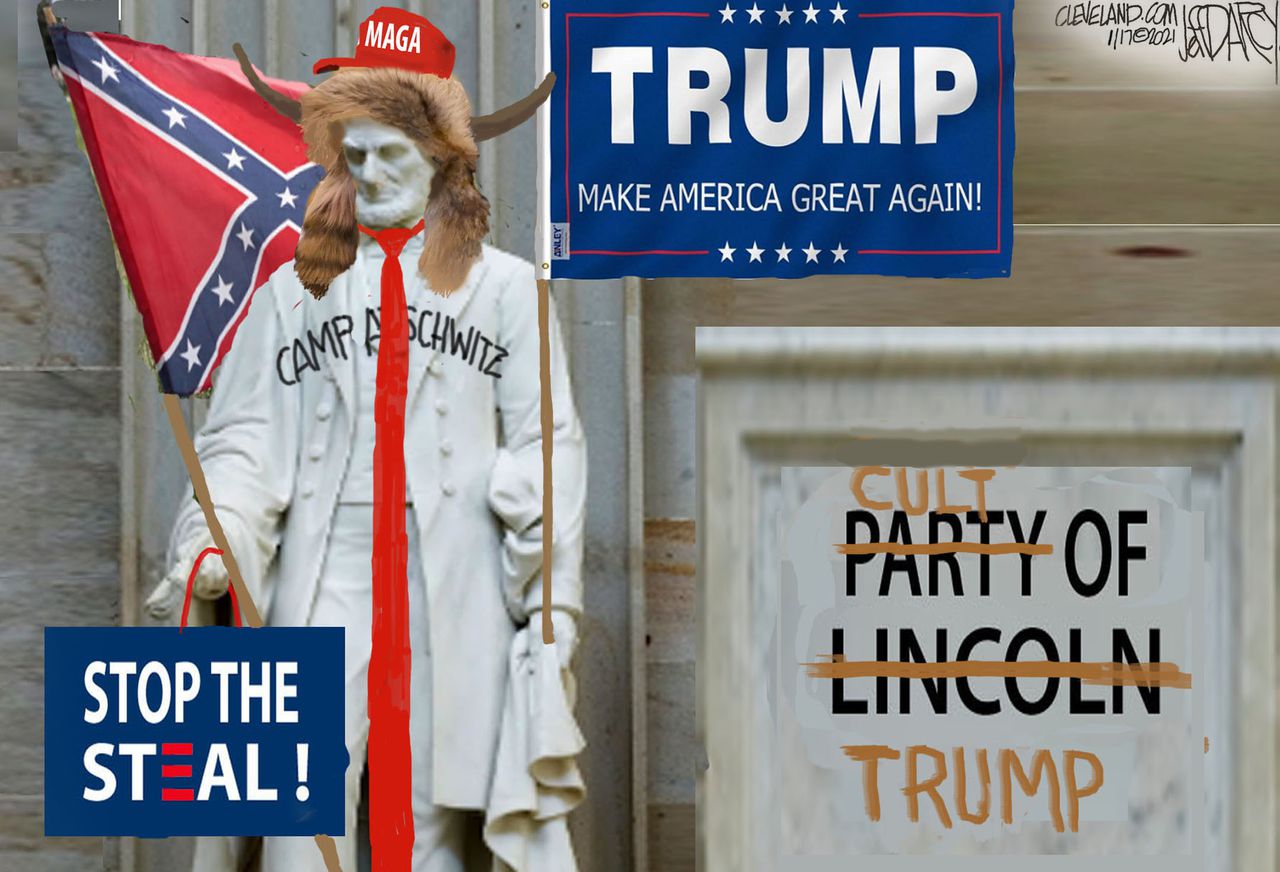 CLEVELAND, Ohio – Today is officially International Holocaust Remembrance Day. Sadly, this is needed more than ever, as demonstrated by Holocaust Repudiation Days 2021, such as January 6. As a 50-state survey of Millennials and Gen Z found that more than one in 10 had never heard of the term Holocaust, and 63% were unaware that 6 million Jews had been killed there.

The cartoon above was first published on Cleveland.com and published in The Plain Dealer on January 17, 2021. It depicts the breaking down of standards that President Abraham Lincoln had set and the vandalism of the US Capitol by insurgents Trumpian which included one wearing a ‘Camp Auschwitz’ sweatshirt.

Packer has now pleaded guilty to a trespassing charge and faces up to six months in prison.

One day in the fall of 2021, a school district in Texas actually tried to force the school system to also stock books with “opposing” views on the Holocaust. What? Like Hitler’s “Mein Kampf”?

Texas school districts’ call for Holocaust denial books may help explain 50-state poll showing millennials and Gen Z had little knowledge of the Holocaust, more than one out of 10 having never heard the word, and 50% believing that 2 million Jews died during the Second World War. not 6 million.

Unlike the millennials and Gen Zs interviewed, I remember like it was yesterday when me and my high school history classmates saw a documentary film of actual footage from Nazi prison camps, including Auschwitz. The footage was taken when the camps were first liberated. It was so graphic and disturbing that we had to get written permission from our parents before viewing it. The history class was in a Catholic high school and taught by an order of the Brothers of the Holy Cross. His classroom looked like a history museum with real Nazi and Allied uniforms on display. Then we saw both the atrocities and the heroism committed by the humans wearing these uniforms. I wish uninformed interviewees could be educated or learn about the Holocaust as I was and will never forget.

The man who fell to earth • AIPT