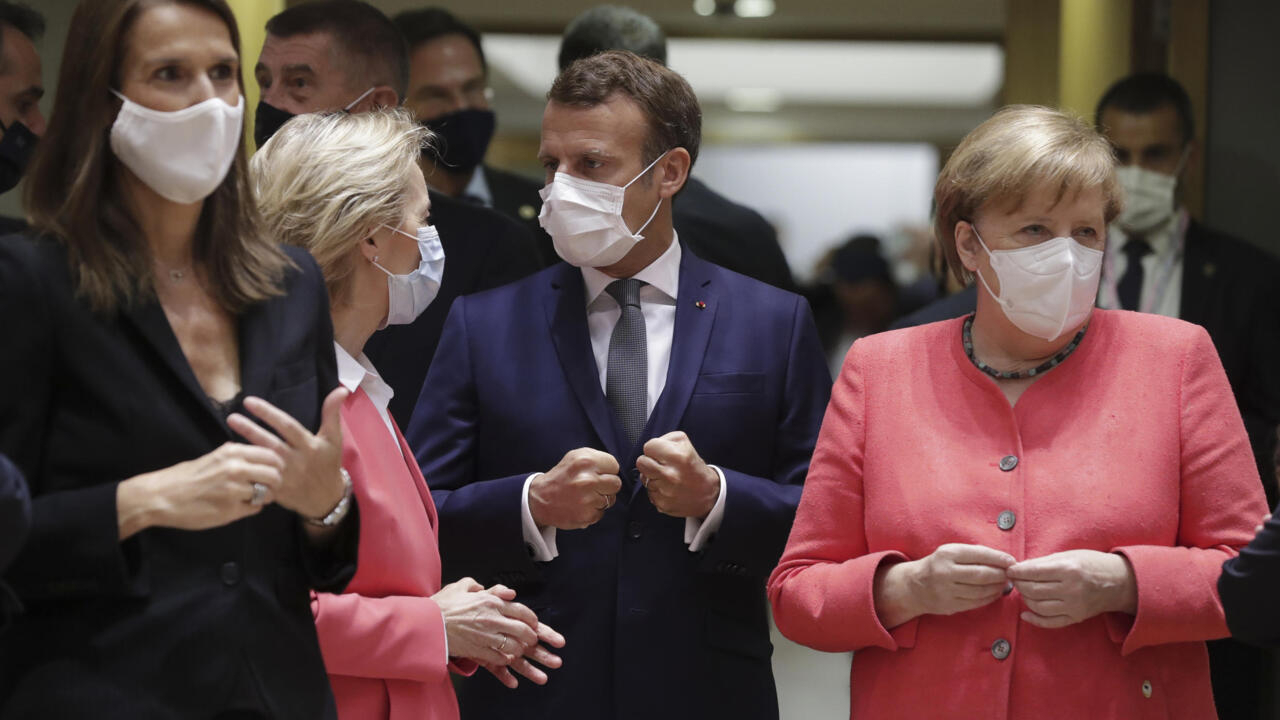 EU leaders are due to meet on Saturday for the second of two days of torturous negotiations to debate the terms of a massive post-coronavirus economic bailout.

Europe is in the depths of its deepest recession since World War II and the 27 leaders are seeking common ground on the terms of a € 750 billion stimulus package that would help relieve the hardest affected by the pandemic.

There is strong resistance from a group of richer and smaller nations led by the Netherlands and Austria who are loath to distribute money to countries like Spain or Italy that ‘they consider it too lax with public spending.

German Chancellor Angela Merkel turned 66 on Friday and as she and her colleagues kicked off this first in-person summit since February, they gave her gifts and nudged her instead of handshakes.

But the good mood quickly turned bleak once talks began, with leaders taking their seats at an EU headquarters with reduced staff and social distancing enforced.

“The differences are still very, very big so I can’t predict whether we will be able to come to an agreement this time around,” Merkel said upon arriving.

“It would be desirable, but we also have to face reality,” she said. “This is why I expect very, very difficult negotiations.”

French President Emmanuel Macron called it a “moment of truth” before starting the first session of talks that diplomats called cordial but slow.

Merkel and Macron are backing a stimulus package made up of a mix of loans and grants to member states to revive economies shattered by the virus and preventative lockdowns.

“It is our European project which is at stake here”, warned Macron, before meeting the Dutch Prime Minister Mark Rutte, who opposes the distribution of money without difficult conditions and without effective veto power on the plans national rescue organizations.

“Solidarity, yes,” Rutte said of countries that don’t have the budget to fuel a meaningful recovery.

“But at the same time, you can also ask these countries to do all they can to solve this problem yourselves next time. And you do it through reforms, in the labor market, in pensions, etc. . “

After about eight hours of talks, the leaders broke up to meet in small groups, planning to meet again for a working dinner at 8:00 p.m. (6:00 p.m. GMT).

The summit is set to take place on Saturday and maybe even Sunday, but few here are confident of a breakthrough, despite the tight schedule, so another top could follow later this month.

A diplomat said they expected Friday to end with summit host Charles Michel, the president of the European Council, presenting a new proposal, which leaders would consider overnight before starting again on Saturday.

But Rutte rated his chances of success this weekend at less than 50 percent.

Michel’s current draft plan calls for a stimulus package, made up of 250 billion euros in loans and 500 billion in grants and subsidies that would not have to be repaid by the beneficiary member states.

The Netherlands have emerged as the countries most likely to resist, but Rutte’s position is supported to varying degrees by the other members of the “Frugal Four” – Sweden, Denmark and Austria.

Austrian Chancellor Sebastian Kurz has said he and his allies will reject anything that leads to a “permanent” transfer union, “an allusion to a centralized state comparable to the United States.

The frugal want strict conditions on all loans or grants to ensure that heavily indebted countries implement labor market reform. The south is opposed to it furiously.

“If the money is not used to invest in the future, if it does not go hand in hand with the necessary reforms in states that are simply broken in their systems … then it will all fall apart,” warned Kurz.

Michel and Merkel, whose country has just assumed the continued EU presidency for six months, will find it difficult to negotiate a compromise – one diplomat joked that they were trying to “defrigalize” the debate.

This package comes on top of the EU’s planned budget of 1,074 billion euros over seven years from 2021 to 2027 which leaders must also accept in the weeks or months to come.

At least 30,000 girls forced into marriage in Iran every year, minister says