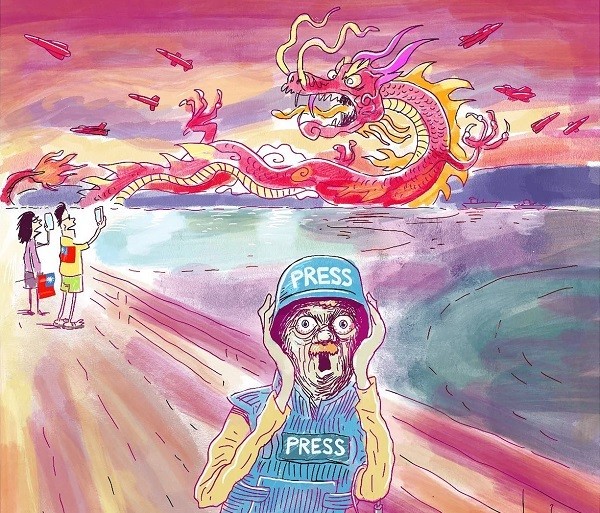 Cartoon of the day: Concern of the foreign media against Taiwanese tranquility | Taiwan News

On August 2, just minutes after Nancy Pelosi’s arrival in Taiwan, the People’s Liberation Army (PLA) said it would hold “extensive military exercises and training activities, including live fire” in six areas around Taiwan proper from August 4 to August 4. 7. The exercises included a record number of PLAAF aircraft in a single day entering the ADIZ, many of which crossed the median line.

International media reports of Beijing’s slashing have reached fever pitch with headlines warning of the “pre-invasion noose” and pundits touting Beijing’s newfound ability to “strangle Taiwan”. However, even at the height of the exercises, when four Chinese missiles flew over Taipei, albeit “outside the atmosphere”, the government issued no alerts and Taiwanese dined in restaurants and shopped in the streets. streets as usual.

Despite the fact that the live-fire drills were unprecedented in scale and proximity to Taiwan, within 10 miles in some areas, Taiwanese casually went about their daily lives after being raised under constant threats from the Communist Party. Chinese (CCP) since birth. The island of Dongyin, just off the Chinese coast, exemplified this unflappable attitude with visitors enjoying a bubble bath party with water ‘machine guns’ and raunchy lyrical EDM music.

Swedish journalist Jojje Olsson published an article on his Kinamedia blog on Monday (August 15) titled “Satire: Taiwanese citizens and foreign media react to Chinese military exercises” and included an illustration by Swedish artist Niklas Eriksson (@KluddNiklas). Olsson pointed out that some Taiwanese tourists have even flocked to beaches such as Liuqiu Island to catch a glimpse of the expensive PLA pyrotechnic display.

Eriksson’s article that day focused on the gap between Western media coverage of the exercises, no matter how “sensational or ignorant”, and the actual conditions on the ground in Taiwan. Olsson noted that instead of “running for shelter or preparing food and other necessities, life on the resilient island continues as usual,” as it was before the start. exercises.

Clearly inspired by Edvard Munch’s painting ‘The Scream’, the illustration features the screaming character wearing a bulletproof vest and helmet with the words ‘Press’ engraved on it. In the background, a fierce red Chinese dragon roars and launches missiles and fighter jets as two bespectacled Taiwanese tourists serenely record the spectacle with their smartphones.