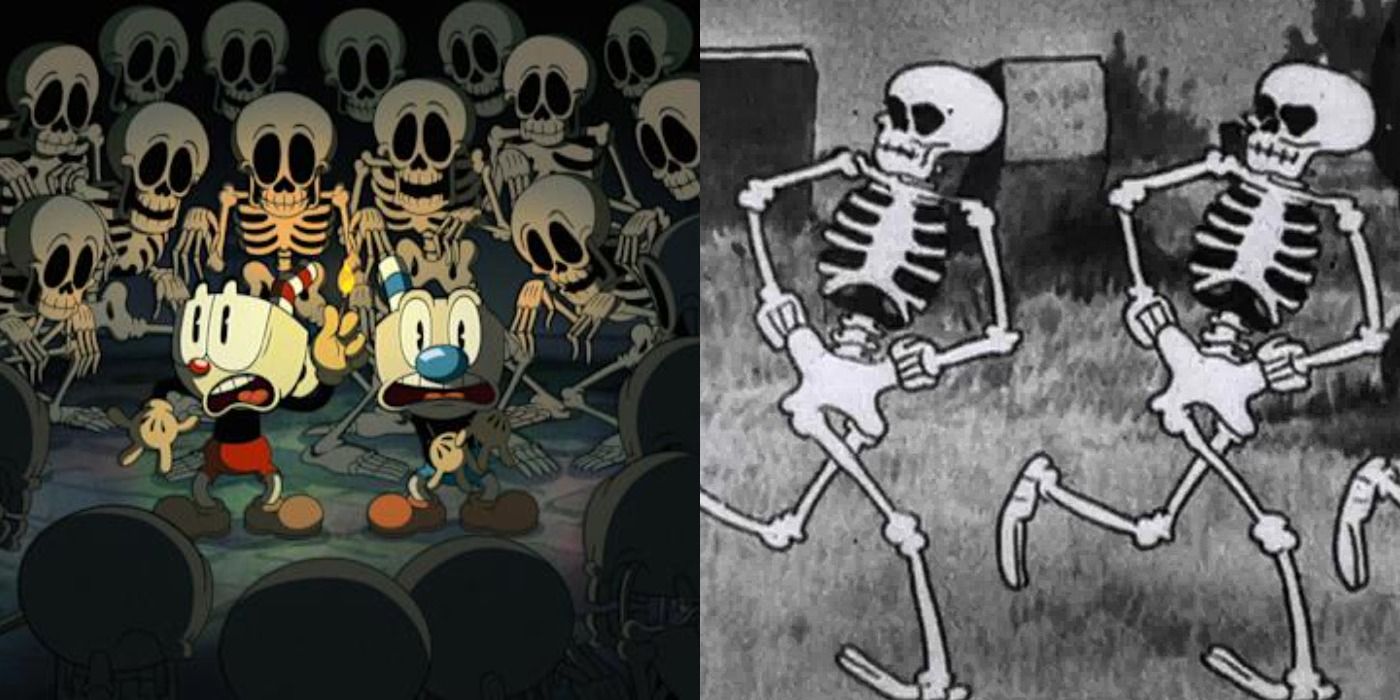 9 references to old Disney cartoons in the series

Cuphead is a game that takes a lot of inspiration from the colorful cartoons of yesteryear, especially those created by Max Fleischer and an up-and-coming Walt Disney. Naturally, an animated series on Netflix would have to follow the same path in order to properly create that same ink-and-paint pattern.

While the Fleischer influences are more front and center, Disney magic is definitely a strong influence on many of the show’s visual choices. It wouldn’t be wrong to say that few episodes are more than a little familiar to those familiar with the studio’s vast catalog of animation. A few winks and nods can only be picked up by a few, it’s clear that MDHR has taken more than a little from the mouse house.

Although a common visual in many animated shorts, regardless of studio, the vibrant and colorful title cards that introduce each episode of the series look incredibly similar to those seen in the collection of brilliant cartoons of Mickey, Donald and Goofy in the 40s and 50s.

It’s the amount of detail in these title cards that separates something from a Disney production from something Tom and Jerry or one looney tunes cartoon. While Disney was certainly no stranger to simple, painted titles, the depth and textures of some of them are carefully recreated in many Cuphead episodes.

One of the most glaring character choices was the design of the many musical instrument beings seen across the series. From the show’s intro to the random residents of the Inkwell Islands, they all sound incredibly familiar, especially the saxophones and string instruments.

Impersonating objects is nothing new, especially in the anime world, but the instrumental characters seen in the series are almost look-alikes for those in the Silly Symphony, Land of music. Although the instruments of the orchestra do not appear to clash with those of jazz, the visual similarities simply cannot be denied.

If that wasn’t obvious early on, it should be made clear once Cuphead’s outfit is seen hanging in his closet. With little exaggeration, Cuphead’s attire is practically two buttons away from being a half-finished Mickey Mouse cosplay. Gloves might be okay, but it’s the color combo and palette that reinforces the fact.

Considering what an immortal cartoon icon Mickey is, it’s hard to fault MDHR for considering him inspirational. That being said, it’s probably something they really had to toe the line with to make sure its design wasn’t too similar.

The Talking Phone (Through the Mirror)

Although he doesn’t have the garbled voice seen in the original Mickey Mouse cartoon, the telephone character in some of the mob shots, notably in the episode “Roll the Dice”, is eerily similar to the same character in Mickey’s dream. In fact, the biggest difference is the color scheme.

RELATED: 10 Things Fans Want To See On Netflix’s Cuphead Show (According To Reddit)

The original Disney cartoon features Mickey taking a trip through the looking glass into a world full of personified objects, including a jumping phone. While the Inkwell Isle resident isn’t quite as engaging as his Disney inspiration, the resemblance is uncanny.

King Dice already had a troupe of playing card minions in the video game, but their design was changed to be better suited for playing in a Boston-Pops inspired jazz band. It’s easy and understandable that casual anime fans might see this as a nod to Alice in Wonderland, but hardcore Mickey fans will notice more similarities between them and a different deck of cards.

Yet another design choice from Through the mirror, the cards have a design inspired by the king, queen and joker that Mickey encounters in his fantasy. It’s not a recreation to the letter, but there’s enough to grab a Disney fan’s attention.

To be fair, the amount of personality the animators give their ghosts in the episode “Ghosts Ain’t Real” is truly remarkable. Each ghoul in the graveyard is distinct and unique, and MDHR has gone to great lengths to make them their own. That being said, there are more than a few things with a common denominator.

The facial expressions, big noses, bowler hats and devilish cackles are all reminiscent of the lonely ghosts seen in the Mickey Mouse cartoon of the same name. While there isn’t a single individual instance, there are various ratings and endings that anime fans will find familiar.

In the same episode, Mugman falls victim to the cartoon cliche of a wild imagination in a scary place. It might be a common trope, but the visuals selected for its panic are almost instantly recognizable from not one but two different Disney projects.

As Mugman waits for Cuphead to return from the spooky forest with firewood, he begins to see monster-shaped trees and roots, while whistling a tune to try and keep his composure. The Monster Trees and Alligator Root are all inspired by Snow White’s escape through the forest, while Mugman’s reactions are nearly identical to Ichabod Crane’s in Disney’s third act. Sleepy hollow. They even have an interaction with a pair of deceptive fireflies.

One of the most recreated scenes from a classic Disney cartoon has to be the titular skeleton dance. This skeletal song sequence has been referenced and remade in everything from cartoons like The Sinister Adventures of Billy and Mandy commercials and even other Disney projects.

RELATED: Cuphead and 9 More of the Most Beautiful Hand-Drawn Video Games

Imitation is meant to be the sincerest form of flattery, and this could be said for Goblet head. Although their take on the classic cartoon trope is more of a mambo than a line dance, the skeletons seen in the episode “Ghosts Ain’t Real” seem to have the same comedic sense of rhythm and timing.

It might fly under some viewers’ radars, but those deep in Disney animation and lore will see this instance as one of the show’s most egregious Disney references. It starts out subtly, but slowly turns into a huge a-ha moment that anyone has seen. Fancy will recognize.

Although the chore is different and the music has been changed, the devil quickly gets ripped off painting a fence in the style of “The Sorcerer’s Apprentice”. From the way he conducts his magical energies to the way paintbrushes dance and dip into buckets of paint is a direct imitation of Mickey and the brooms. The music and the pattern may be different, but the comparison is inevitable.

For Melbourne-based cartoonist and illustrator Oslo Davis, the joke is all that matters