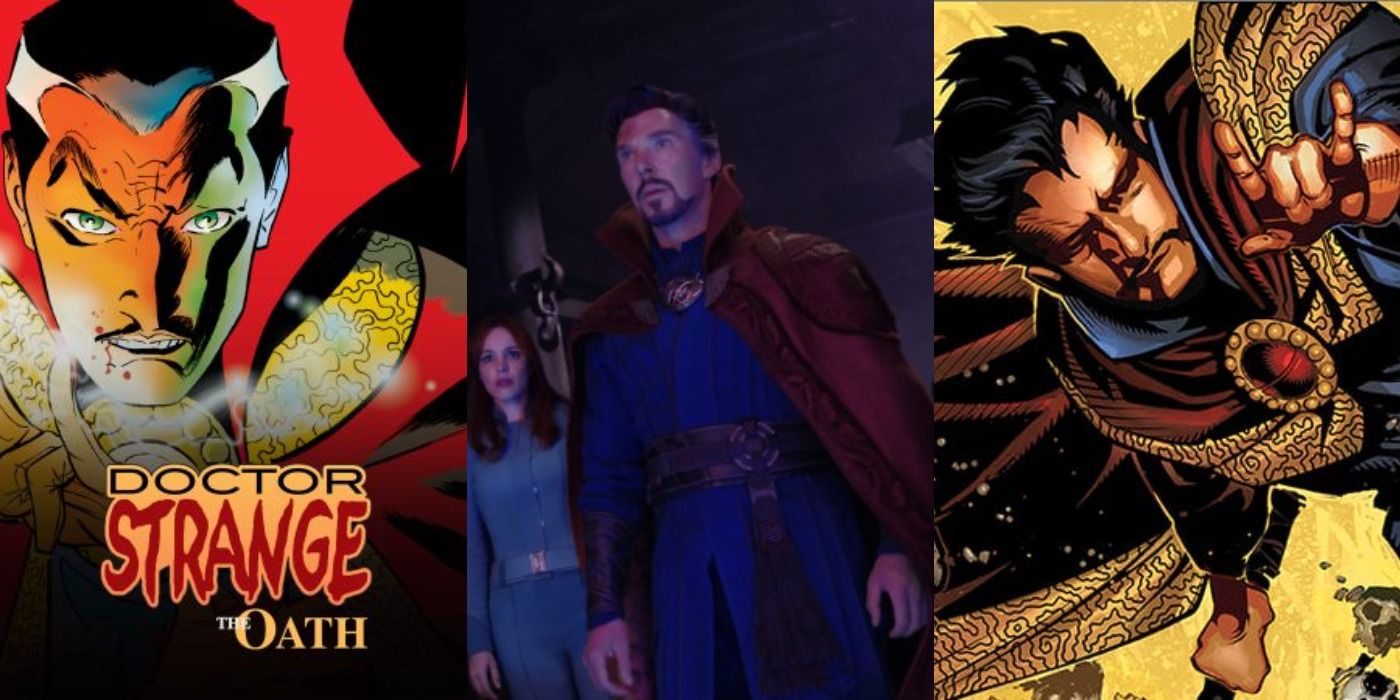 Doctor Strange: Multiverse of Madness is almost here, and the film’s trailer promised a mystical adventure unlike any other in the Marvel Cinematic Universe. The Sorcerer Supreme will certainly have his work cut out for him, and it looks like he may have to fight an evil version of himself.

Doctor Stephen Strange first appeared in Weird Tales #110 by Stan Lee and Steve Ditko in 1963. Since then, he has been a regular part of the Marvel Universe and has been part of the Avengers and Defenders. He had a lot of great stories told about him, and many of them are justifiably weird.

The time of the Sorcerer Supreme came to an end recently with the Death of Doctor Strange by Jed MacKay and Lee Garbett. A mysterious assassin has taken Stephen Strange’s life and stolen his hands. Fearing that day may come, Doctor Strange has saved a week of his life for this occasion, and a young Stephen Strange arrives to solve his own murder.

He is aided by the Avengers, Clea, Wong, and Beats the Ghost Dog. Meanwhile, the Three Mothers arrive to harvest life force from the earthly realm to nurture their offspring, the Pilgrim Child. Refugees from other mystical realms also seek asylum on Earth with disastrous effects.

After Las Vegas was destroyed by Hydra, Doctor Strange sought to undo the damage by resurrecting the city, people, buildings, and everything. Unfortunately, this also brought Mephisto and part of Hell to the surface. Doctor Strange must assemble a new team of Midnight Sons to face this threat: Iron Fist, Blade, Ghost Rider, Wong, Moon Knight, Scarlet Spider, Man-Thing, Elsa Bloodstone and Brother Voodoo.

Nick Spencer, Donny Cates, Szymon Kudranski, and Rod Reis put together this story, which shows Stephen Strange acting incredibly recklessly and suffering the consequences of his actions. This should be a good introduction for Multiverse of Madness in this way.

8 Stephen searches for a successor in ‘New Avengers: Search For The Sorcerer Supreme’

Unsurprisingly, Doctor Strange lost his title of Sorcerer Supreme at some point. This happened when the Hood and an army of villains invaded the Sanctum Sanctorum and Doctor Strange used truly dark magic to repel the invaders. This caused Stephen Strange to lose faith in his ability to fulfill the duties of Sorcerer Supreme. He gave up the mantle to pull himself together and figure out the best way forward.

RELATED: 10 Marvel Cameos Everyone Wants To See In Dr. Strange 2

This story follows the Illuminati as they attempt to stop the untimely end of the Multiverse caused by the Incursions: an event in which two parallel Earths collide and destroy the two native universes in destructive feedback. Eventually, Captain America and the Avengers find out what the Illuminati have been up to, and a war between the Avengers and the Illuminati erupts as the universe dies around them.

Doctor Strange works with Doctor Doom to find a way to save at least some remnants of existence. To do this, Molecule Man imbues Doctor Doom with the power of the Beyonders, and Doctor Doom builds a patchwork Earth called Battleworld out of different versions of Earth. Doctor Strange is the counselor and court sorcerer of the new God Emperor Doom.

Other survivors of what was before also make their way to Battleworld: namely Mister Fantastic and a team of heroes and Namor, Thanos and their Cabal. Doctor Strange must decide if it’s worth betraying Doom so reality can be remade or if he should play it safe and side with his new God Emperor. This story comes from Jonathan Hickman and Esad Ribic.

When Galactus tries to consume an inhabited world, a reckless and inexperienced wizard banishes Galactus to the mystical realms. This is the multidimensional plane where the magic originates, and Galactus begins to consume the worlds within.

Galactus is a being of science, and science is antithetical to magic. This unholy marriage has the potential to destroy the multiverse, and Doctor Strange must find a way to banish Galactus from the mystical realms. He does this by offering to be Galactus’ new herald. This story was told in Doctor Strange: Herald by Mark Waid, Barry Kitson and Scott Koblish.

4 Stephen Strange goes to space in ‘Doctor Strange: Across The Universe’

When his connection to sorcery seems to be fading, Doctor Strange (with help from Iron Man) travels to space to see how sorcery works on other planets. He meets an alien archaeologist named Kanna along the way.

This adventure helps Doctor Strange reconnect with magic and the team of alien artifacts that grant him mystical new power. He also finds the Time Stone in the hands of the Super-Skrull. This story is collected in Doctor Strange: Across the Universe by Mark Waid and Jesus Saiz.

Doctor Strange: The Oath by Brian K. Vaughan and Marcos Martin finds Stephen Strange shot and wounded. Someone tried to kill him, and he needs to find out who and why. The problems get worse when he discovers that Wong has terminal cancer and is barely hanging on to life. Strange must save Wong and himself, and he will do whatever it takes to keep his friend alive.

This trip finds Doctor Strange at odds with another doctor who was trained, albeit partially, by the Ancient One. His name is Doctor Nicodemus West and he is also a wizard.

2 Strange and Doom team up in “Doctor Strange & Doctor Doom: Triumph And Torment”

Every year, Doctor Victor Von Doom attempts to rescue his mother from the pits of hell, and each attempt ends in failure. Doom eventually enlists the help of Doctor Stephen Strange to complete this quest, and the two travel to Hell itself to save Victor’s mother from Mephisto.

1 ‘Doctor Strange: The Way Of The Weird’ Shows The Last Days Of Magic

Doctor Strange got a fresh start in All-New, All-Different Marvel under the direction of creators Jason Aaron and Chris Bachalo. This story is called “Way of the Weird” and finds an interdimensional army called the Empirikul trying to wipe out all remnants of magic across the multiverse. The Empirikul are fanatics of science, and they seek to uphold absolute logic.

Magic is nearly purged from Earth, so Strange and a handful of allies must go back to basics and use every bit of magic from whatever artifact they can find to fend off the Empirikul and save magic.

NEXT: The 10 Most Diverse Comic Book Characters Of All Time

Josh Davison is a listings writer for CBR, The Gamer, and Game Rant. He is well versed in all things Marvel, DC, Pokemon and Star Wars and has a deep passion for horror. He has a terminal obsession with the Thunderbolts, the Winter Soldier, Luke Cage, and Hawkman. He is currently trying to make it as a comic book writer and is part of two upcoming anthologies: Turning Roads by Limit Break Comics and Producing the End of the World by publisher Soda & Telepaths. Find him sharing cool comics and cute animals on Twitter, @joshdavisonbolt