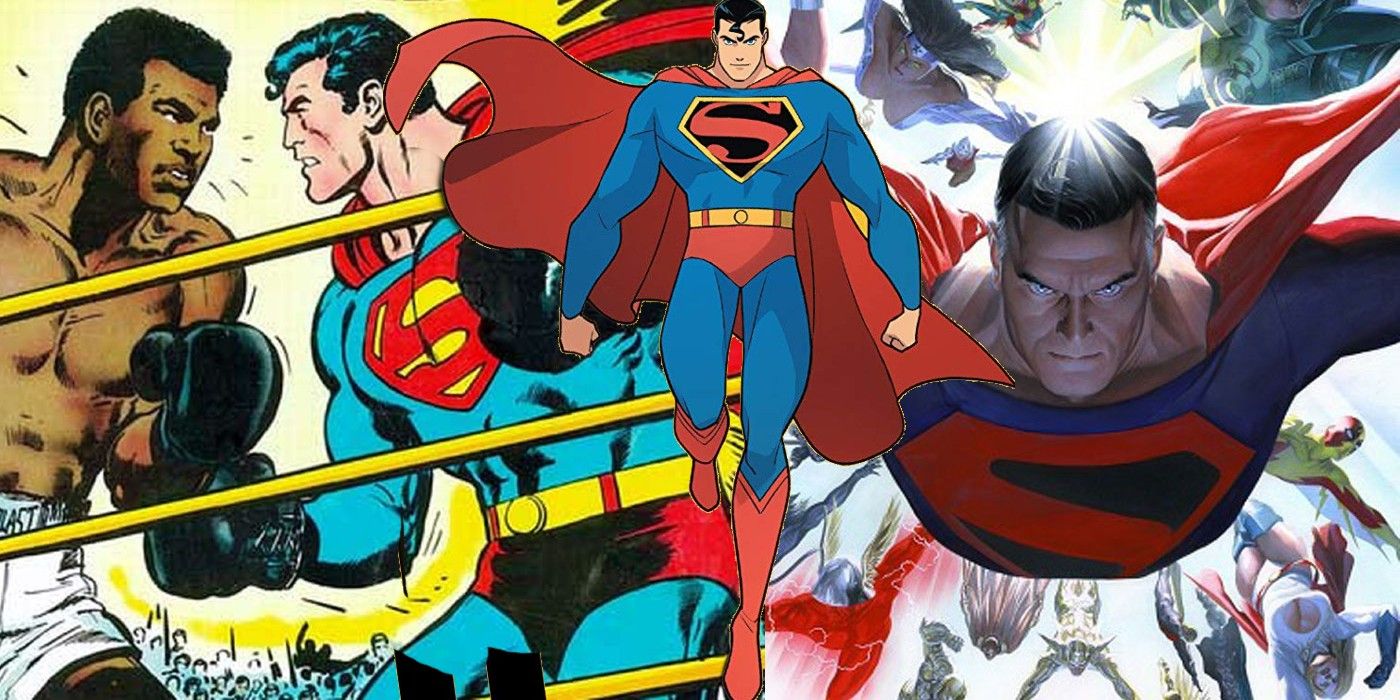 10 classic Superman comics that haven’t been adapted yet

Since almost the moment Superman appeared on the cover of Action comics # 1 in 1938, The Adventures of Man of Steel jumped off the page and across all available media. Krypton’s last son has been a radio star, television star, and movie star in the decades since his first appearance.

RELATED: 10 Comics That Redefined Superman (& How)

And despite hundreds of hours of radio, TV, and movies featuring the world’s first superhero, there are still plenty of wonderful Superman stories that haven’t been adapted. Some of the stories are in the more classic hero vein, while others may be seen as too original or too new to have had the chance to move from the page to a different form, but these are all success stories. quickly. put their own mark on Superman and are great options for film and television.

ten What happened to the man of tomorrow ends the story

One of the greatest Superman stories ever told, and the final Silver Age Superman story, “Whatever Happened to the Man of Tomorrow” chronicles Superman’s last days as his greatest enemies turn against him in a final battle epic and tragic. Written by Alan Moore with art from iconic Superman artist Curt Swan, “Whatever Happened to the Man of Tomorrow” was done both as a goodbye and a celebration of the pre-Crisis on Infinite Earths version of the Man of Steel, closing the original Superman series with the number 423 before the reboot of the title for the post-Crisis the comeback.

9 Panic in the sky brings action

An 8-part story named after an episode of the 1950s television series Superman Adventures, “Panic in the Sky” saw Metropolis Marvel and the rest of the Justice League take on Brainiac and his latest deadly weapon, Warworld.

“Panic in the Sky” brings out something rarely seen in Superman movies or TV shows – the cosmic villains that Man of Steel deals with. Somehow, while there are eight Superman movies live-streaming, Brainiac – one of the hero’s greatest enemies – never made it to the big screen. Hopefully that will change soon.

8 Kingdom Come reminds us why we need Superman

While kingdom come deals with many great heroes of the DC Universe, it is without a doubt a story about Superman and, more specifically, why Superman matters. In this classic tale by Mark Waid and Alex Ross, readers discover a world where Superman has given up and where the more pessimistic parts of humanity have started to take over.

With amazing superhero action, kingdom come is a great reminder of the importance of faith in yourself and in others to make the world a better place. This might be too big a story for a live-action movie or series, but kingdom come could do one hell of an animation project.

Written by Kurt Busiek with art by Stuart Immonen, Superman: Secret Identity is a series of four issues which takes up the original concept of the pre-Crisis Superboy-Prime and develop them. The story centers on an ordinary boy named Clark Kent who shares a name with the famous comic book hero, much to his chagrin. Everything changes when this real-world Clark learns that he has superpowers just like the Man of Steel and decides to follow in the fictional character’s footsteps and become a true superhero. The story follows Clark as he lives his life, growing from a teenager to an old man who doesn’t save lives as often as he used to, but has found a life worth living.

Written by Gene Luen Yang with illustrations by Eisner Prize winner Gurihiru Superman crushes the Klan is actually an adaptation of a story from the 1946 narrative arc of the Adventures of Superman radio show, “Clan of the Fiery Cross”. The comic centers on Tommy and Roberta Lee, children of a Chinese-American family who just moved to Metropolis to find themselves the target of the local chapter of the Ku Klux Klan.

The siblings meet Jimmy Olsen who, in turn, helps them get in touch with Superman. Sure enough, Superman is no fan of bigotry and is moving quickly to rid his town of the KKK threat. With Gurihiru’s fantastic art style, this story seems like a no-brainer to be turned into an animated film.

5 Superman vs. Muhammad Ali is the fight of the millennium!

Another Superman story that would make a wonderful animated movie is Superman vs. Muhammad Ali. The special story, which saw Metropolis Marvel take on Louisville Lip in a fight to save Earth from an alien threat, has all the tricks of a great animated movie.

And for all viewers unfamiliar with the history of the comic book, the fight would certainly have a shocking twist as the boxing champion knocks out the Man of Steel in an epic match that will never happen again.

Superman’s origin has been told in just about every available format, often multiple times. There are two live origin films and several live shows that have shown its origin in one form or another, and countless animated versions of the tale for people to enjoy. But neither of those versions said it like Jeph Loeb and Tim Sale put it in Superman for all seasons.

In this version of Superman’s beginnings, each of the four chapters is told from the perspective of someone close to the Man of Steel and what it means to them. While three of the chapters focus on people who love Superman, one chapter is told through the eyes of Lex Luthor, giving an interesting look at the hero through the eyes of his greatest rival. Superman for all seasons could be a fantastic short series on HBO Max.

3 Superman: Exile goes where no Superman movie has gone before

For most of Superman’s existence, the idea of ​​making a Man of Steel movie set in the far reaches of space seemed insane. The costs alone would have been too high just ten years ago. But now, thanks to the magic of special effects, a Superman movie set on another planet is no longer difficult to imagine.

While the classic Superman: exile story – which saw the Man of Steel go into space as a penance for killing General Zod and his crew – would need a few changes to function as a movie, with the idea of ​​Superman becoming a gladiator on Mongul’s Warworld is too cool not to be a movie though and needs an adaptation at some point.

While the adventures of Superman are well known, the stories of the people who create them receive much less attention. In 2004, DC released It’s a bird… through their Vertigo imprint. The story, written by Steven T. Seagle, with art by Teddy Kristiansen is an autobiographical account of Seagle’s concerns about writing Superman stories as he himself faced a potentially family secret. deadly and in the future of his relationship with his girlfriend. .

RELATED: 10 Ways Superman Has Changed Over The Years (For Better Or Worse)

It’s a bird… is a fantastic look at the mind of a writer and how difficult it can be to really see the world through Superman’s eyes. Much like Professor Marston and the Wonder Women, this story is about the people behind the legends.

Written by Geoff Johns and illustrated by Gary Frank, “Brainiac” was a five-part storyline in the pages of Action Comics that saw the return of the Silver Age embodiment of Brainiac in the comics while combining pieces from each version of the villain. History has also reintroduced the bottled city of Kandor.

But what really makes “Brainiac” so ripe for the adaptation is the goosebumps Johns and Frank add to the villain. The look Frank gave Brainiac would be used in the ephemeral Krypton live-action series, but that’s no reason not to bring this fad back for a live-action movie.

NEXT: 8 Must Read Modern Superman Comics

Born and raised in New York City, Derek Faraci moved to Los Angeles in 2001 and joined Activision where he worked on many successful franchises including Spider-Man, Tony Hawk and Guitar Hero. In October 2009, Derek left Activision to join Scientifically Proven Entertainment. Since joining SPE, Derek has worked on Man vs. Wild: The Game, Blood of the Werewolf and the Sucker movie directed by Michael Manasseri. Derek has written over 500 articles for a number of sites and magazines, including Blumhouse, CBR, Birth.Movies.Death and Solis. With the option, Derek would spend all of his time watching movies and reading comics. More of Derek’s work can be found at DerekFaraci.com and you can find him on Twitter at @wh_woolhat.